But You Can Win Her Yet

Choreographer Robin Lewis presses the "play" button on the boom box and, for what must be the eleventy-seventh time this afternoon, the strains of "Shipoopi" fill the small dance studio in Lakeway. And even though the dancers have been at this for close to three hours and Meredith Willson's relentlessly bouncy tune must now be grating on their nerves, they lock their eyes on their reflections in the rehearsal mirror, straighten their shoulders, smile, and launch into the routine one more time. A step is missed here and there, but the dancers nail maybe 90% of the moves, serving up an impressive array of shuffles, cartwheels, spins, and kicks that send their feet higher than their heads. So juiced up and joyful is this crew that, if not for those occasional missteps, you'd be hard-pressed to guess that they had worked this dance so many times already, much less that they had only learned it that day. That's right, that very afternoon.

And did I mention that these dancers were all teenagers?

Yes, these are some of the young charges in TexARTS' Summer Intensive Musical Theater Academy, and as the sweat-stained T-shirt on Robin Lewis' back reads, it's "intense!!!" While Lewis, the nonprofit's co-founder and musical theatre academy director, has been getting "Shipoopi" shipshape with the older kids (ages 14-19), co-founder and executive director Todd Dellinger has been drilling the younger ones (ages 9-13) on other songs from The Music Man. This is after the two groups have already had sessions in tap, voice, acting, and ballet today. And that's just one day. By the end of the third week, the 41 students will have received more than 65 hours of instruction in all aspects of movement and theatre, much of it taught by nine New York professionals, including current Broadway performers, Tony nominees, and a leading dancer with the Martha Graham Dance Company; plus logged another 40 hours rehearsing songs and dances from The Music Man, which they'll perform on the last day. And let's be clear: We're not talking some threadbare recital in a middle school cafetorium with a marginally tuned upright. We're talking the Paramount Theatre stage, a full orchestra, and a cast of 90, led by two artists who actually played the leads in this show on the Great White Way a few seasons back.

In other words, this ain't just any old theatre camp. This is a program put together by a pair of real performing-arts pros, which puts kids together with real performing-arts pros, hones their skills, and then turns them loose on a big stage where they can strut their stuff like real performing-arts pros. Sure, it works them hard, but the kids are lapping it up. Lewis and Dellinger started the TexARTS program less than a year ago with 20 students. They doubled that the next semester, and though the number of enrollees for the Summer Intensive is about the same as for the spring, only about a third of the kids came from the previous programs. Most of the other two-thirds signed on because word is out that this program is the real deal.

And the real deal is what Dellinger and Lewis aim to provide. They've been there in the majors, Lewis on Broadway dancing in Fosse, The Producers, and Beauty and the Beast; Dellinger running the Martha Graham Dance Center. Now, they've found a new home in Central Texas, but they want to use their experiences and connections to bring artists who have made it in that other world here to give kids who want careers like they've had the tools to get them. That means Tony nominees like Rebecca Luker, Lee Roy Reams, and Ken Page; and dancers like Rachelle Rak, who's currently on Broadway in the musical Dirty Rotten Scoundrels, and Tadej Brdnik, a Martha Graham company member for a decade. So far, 20 such professionals have made their way to Lakeway to serve as instructors in TexARTS' academy. And if Dellinger and Lewis have their way, that's just the beginning of what TexARTS will offer. 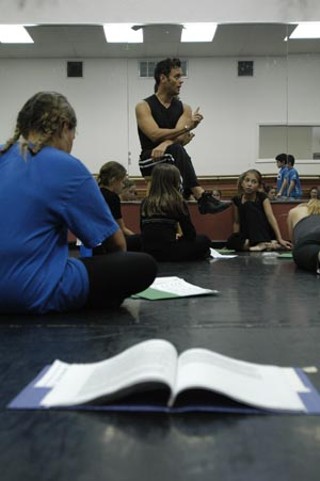 This Saturday, the company is making its first foray into musical theatre production with the concert presentation of The Music Man ("concert" meaning scaled-back production values, evening dress instead of costumes, scripts in hand, orchestra on stage, but still full choreography and full score). It isn't just a showcase for the Summer Intensive students, although they're a key component; it's a showcase for the kind of musical theatre TexARTS can bring to Austin: masterpieces of the American musical's golden age, performed by a blend of Austin talents and Broadway's best. What with Luker, who received her second Tony nomination for her portrayal of librarian Marian Paroo in the 2000 Broadway revival of The Music Man, reprising the role here, and doing so alongside Jim Walton, who was the standby for Craig Bierko's Harold Hill in that production, all under the direction of Broadway royalty Lee Roy Reams, well, it's pretty clear TexARTS can deliver the cream of the musical crop.

Some of you at this point may be experiencing a bit of déjã vu. Two guys leave the professional theatre/dance rat race to settle in Austin and start an arts company. Classic musicals at the Paramount. Guest artists from Broadway. Performing arts academy for kids. Um, haven't we seen all this before?

Indeed, it was 10 years ago that Scott Thompson and Richard Byron showed up in our own River City to found what became Austin Musical Theatre. They had abandoned the gypsy life – as directors and choreographers for hire in regional theatres across the country – to make a dream come true: creating a home for musical theatre in a place they could call home, with Broadway-quality revivals of classic musicals and a school where they could train the next generation of hoofers and Broadway stars. They managed to realize that dream rather spectacularly for several years. But big budgets and a flagging economy eventually snuffed it out, and Thompson and Byron had to shut the doors on AMT and leave Austin behind. 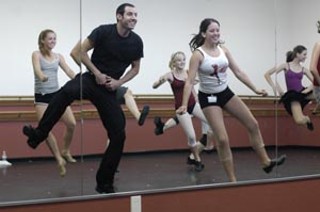 The Music and the Mirror: Lewis showing the way on yet another run-through of "Shipoopi" (Photo By Bret Brookshire)

Now here come Dellinger and Lewis, and at first blush, the parallels with the founders of Austin Musical Theatre are a little startling. But then the more they talk about TexARTS, the more differences that emerge. Yes, it's grounded in that same passion for those great old Broadway crowd-pleasers, and the scale of the vision is just as grand, if not grander, than AMT's. But the razzle-dazzle productions are just one component of this dream, and not even necessarily the central one. This has more to do with a place, a center where art and artists of all disciplines are welcomed and celebrated and nurtured.

Give Dellinger half a chance, and he'll rattle off a description of it in striking detail: "A 400-seat proscenium space, with a movable black wall for 200-seat starlight seating; a 99-seat black-box space; three large rehearsal studios that can also be rented out as event spaces; five music studios for private instruction; and a visual art studio, with some rentable private art studios surrounded by a campus-type setting with sculpture gardens, an open-air-art-show kind of space surrounding an amphitheatre, and surrounding that ring a restaurant/bar, a Capezio satellite store, and an Internet-cafe-type setup. My 2020 vision is that it would be a fully producing entity and a fully accredited training institution linked with one or more universities here and/or nationwide, at all levels from child through college." Clearly, this is no casual daydream; it's something he and Lewis have given considerable thought to and worked out right down to the public-private partnerships and the number of parking spaces. They even have their eye on a piece of property in the area that would be ideal. Now, they just have to get the support.

But given the speed with which things have been moving so far – the rapid growth of the academy, the overwhelming interest from the Lakeway community, the assemblage of a strong board, the participation of so many New York colleagues – that kind of support seems just like a matter of time – and maybe less time than anyone expects. After all, who would have expected those kids to have picked up all the steps to "Shipoopi" in one afternoon? But they did it.

Ah yes, the kids. It always comes back to the kids. "The level of talent is phenomenal," says Dellinger. "They're on. They're focused. They have an energy, and they're giving to it. And you see it, you really do." Don't be skeptical of the sentiment just because they're taking his classes. Almost all of the visiting artists have remarked on the quality and drive of the students here. It's clear from their attitude, says Lewis, that "this is what they want to do. This is what they want to pursue." And that strikes a chord in these professionals. They see reflections of themselves and how badly they desired that stage time and those skills at that age. "A lot of the Broadway people who come here and teach say, 'I wish I'd had this when I was growing up,'" says Lewis. That may explain why they would take the time and make the effort to come all the way down to the middle of Texas just to lead a two-day class for a bunch of teenagers.

"We've all been taught it's time to give to the next generation," Lewis says. "When Fosse closed, Ben Vereen told us from the stage, 'There's not another generation that can teach Fosse. So now it's up to you that know it to teach the next generation.' And I think a lot of the Broadway performers my age are taking that seriously and pursuing that."

That, as much as anything, gets to the heart of TexARTS and explains what this pair of New York performing-arts professionals are doing in a little dance studio in Lakeway. They're giving back. "It's always tenuous when you're laying it out there and wondering if people are going to show up for the first class," says Dellinger. "It's all of our personal money that's being invested in getting this thing rolling. It was very stressful. But when I was down and feeling like, 'What in the hell am I doing? This is crazy,' and you walk into this room, and you think, 'I don't know if I can do this, I don't know if I can pretend like everything is hunky-dory,' you just go into the studio and you watch. And you realize that's why we're here. This is exactly why we're here. These kids are absorbing phenomenal stuff from phenomenal people, and they're being fed by it, and that feeds you. That's a big part of it. No question."