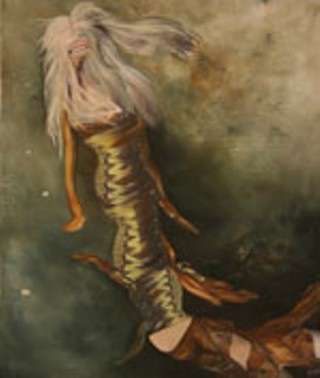 Miss It (Our Maiden of MurkyWater)

In the past, when Daphane Park exhibited her paintings at Women & Their Work and D Berman Gallery, the colors in them appeared at times a bit acidic and harsh, like pool chlorine. But even then her work had clarity, an intensity of focus and detail that was compelling. Now she's back with "True Originals," a solo show that contains crisp edges and the old fierceness but with a new figurative gracefulness and earth tones. She's developed a series of mutant fashionistas with various sexual personas that she pre-sents in mixed media: mirrored digital prints, oil painting, and jars of clear coat on paper. The final product is one-third female creature, one-third creepy textures, one-third dreamy background.

In LaGuardia, a torso rocking a gold lamé corset is doubled. One side grows skinny legs spread wide, the other sprouts a floral sci-fi form for a head. It has something to do with Georgia O'Keeffe and Mark Mothersbaugh's beautiful mutant series, but I have no idea what it means, and I like not knowing. These works relate to posing, physicality, and body image. Park has a portrait, The Shape Shiftress, in which a flouncy gown repeats three times. Instead of attractive legs walking the runway, there are eight severed flesh-colored extrusions. A sea cucumber inside of a fur ball stands in for the head. It's amazing for its implication of movement and walking. The mutations are major, but the gesture and the motion remain clear in the work. Miss It (Our Maiden of MurkyWaters) is basically a mermaid in a heavily strapped corset floating in a murky atmosphere. A frontal posture implies a direct gaze, which is obscured by coarse gray hair that parts only to reveal four giant teeth. The figure is aggressively sexualized – anonymous, like sex with a stranger, and suggesting Cousin Itt from the Addams Family all at once. Parks crams so much into the imagery that her new work is sure to grab your attention and not let go. This great show is at the newly opened Volitant Gallery, which invites you to meet this "beautifully bizarre family of creatures."