Lonely, and You're No One's Nothing Special 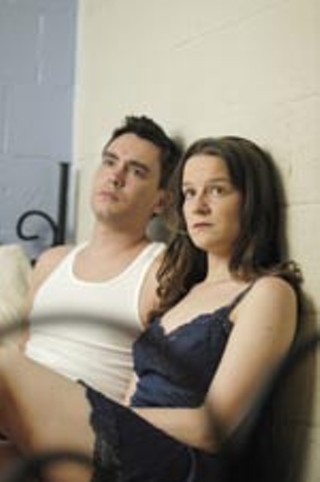 "Lonely" and "You're No One's Nothing Special"

A short play needs certain qualities if it is to be successful. The dialogue has to be concise, the action poignant, and it has to have a live and insightful narrative that takes place, uninterruptedly, in a matter of minutes. It must feel like a comfortable and cohesive whole rather than another half hour of primetime. With people's diminished attention spans today, a short play is all the more attractive to audiences as well as theatre companies, which like the fact that the cast is typically tiny and the overall production cost-efficient. It can seem easy to stage, which is why the short play is so often favored by students or struggling independents. But precisely because the short play is short, it is often relegated to the realm of the festival, where it can be lost among many other short plays. Hyde Park Theatre has given Ann Marie Healy's shorts "Lonely" and "You're No One's Nothing Special," a pair of statements about marrieds, the chance to stand alone the way a playwright might dream them to be without getting lost in a festival setting.

"Lonely" begins with a married couple trying to sell their living room as "where we do all our living." Actress Marisa Pisano emphasizes it with the volume of Donna Reed overstatement and enthusiasm to her character's unwed sister, Francis, who admits to talking to herself (and who was played by Michelle Keffer the night I saw the show but is normally played by Kelli Bland). Noah Neal, who plays Frank, looks out through Buddy Holly frames and says, "My brain wears a tuxedo" when he tries to explain to Francis how he overcame his loneliness. A full-scale fireplace and a cushiony couch sit in the center of the stage, and a serving table with hot toddies is set for about as long as a standard intermission, just over 12 minutes.

In "You're No One's Nothing Special," a married man and married woman meet in the airport. They ask each other getting-to-know-you questions and politely curve their answers to whatever he or she thinks the other wants to hear, starting with "I'm easy." Later, Neal, as a more wide-eyed hopeful than his character in the first play, and Heather Huggins sit apart from each other in postcoital awkwardness, speaking to each other face to face as profile silhouettes. A hand on the shoulder elicits a passionate affair. Director Ken Webster asks his actors to perform in a painfully self-conscious tri-syllabic meter, speaking in three beats, with an underlying "I blank you."

It is Paul Davis' scenic design that sets this production apart from hastily put-together short shows made for a festival. An airport or hotel sign shines through black cloth. A softly lit canyon is spread throughout the stage for the warmest and most philosophical moments between the lovers like a hazy delusion.

This second show is a whopping 28 minutes, but the intimacy of the place, strange and detached as it is with the characters unable to find stable footing with the words, feels nestled in the darkness of the canyon, extending the feeling into a full-length production. With these two shorts, you can leave the theatre fully satisfied and still have the rest of the night open.

Lonely, and You're No One's Nothing Special, Ann Marie Healy