Making beauty on an eyesore 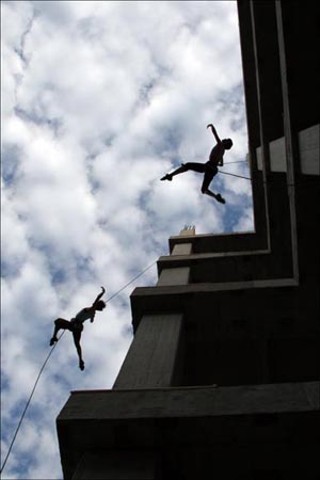 If you've lived in Austin any length of time, you're familiar with the boondoggle that is the Intel building. Located next to the lovely live oaks of Republic Park, the massive concrete skeleton is a result of the city of Austin paying millions in incentives to Intel to build its new HQ Downtown back when chip-making was flying, only to see Intel cease construction when the industry went into freefall, leaving the city with tons of concrete dripping from its collective face. Eventually the site was sold to the feds, who plan to build a new courthouse there. For most Austinites, it's a civic embarrassment and a public eyesore.

But not for Sally Jacques. When the queen of site-specific dance in Austin was told that she could use the building for her latest production, she leapt at the opportunity. "At first I thought, well, it's like the Titanic, it's so big," says Jacques. "Then I started thinking about how it's now a federal building and reflecting on Oklahoma City and these global collective experiences that are so tragic. I thought about all the souls that departed during that time and the souls that are left with memories, and how it's collective. We don't see the individuals, but there's always a person or people connected with someone who's departed. So I wanted to make a piece that was a tribute to a sense of departure or collective loss. But I didn't want to make a tragedy. In a strange way, there's a beauty in when we leave. Because the building was so big, it had to be sort of a movement opera. An enormous number of souls departing. And Requiem seemed like a natural title."

Outside of the elements, Jacques has faced some unique challenges in producing a piece on the exterior of a building. "We've had some funny incidents. People come from restaurants across the street to see what we're doing. There's an area where, when the dancers jump out, it looks as though they're jumping off. You can't see that they're connected. So people are phoning in saying there's someone trying to commit suicide. We had three police cars pull up and a federal agent come in, 'Everybody's saying someone's trying to commit suicide.' And I said, 'Well, how many times is she doing it?' They show up pretty regularly. The other day somebody phoned in and said there were teenagers playing on the building. That's a common one, teenagers playing on the building."

While the scale of Requiem is impressive – climbers and dancers will use all four stories on the north side – what should be most impressive is the dance itself. Jacques' last effort, Whispers of Heaven (clips of which may be viewed on the Blue Lapis Light Web site), was a thing of awesome beauty, and beauty is really what Jacques is all about. "Making beauty or being a part of creating beauty provides a contradiction to the violence that we witness when we see tragedy," says Jacques. "But to get to beauty, we're going through danger."

You'll be perfectly safe, though, sitting or standing, watching the dancers leap and soar in the summer night.