In Randy Wyatt's '9x9x9,' Coda Theater Project offers a kooky thought piece on life / death and the power of God, but a lack of clarity in presentation undercuts some of the fun 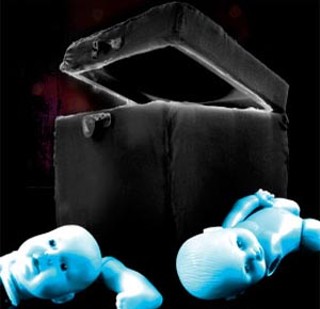 play! Theatre, through May 6

In a universe not too unlike our own, a battle between the forces of good and evil plays out. A young woman finds herself accidentally stuck in a cosmic pre-apocalyptic game. One black box with the dimensions of 9-by-9-by-9 determines the outcome. Coda Theater Project extends an existential metaphor into literal doom in a new play by Randy Wyatt. 9x9x9, titled after this box of miraculous power, is a curious combination of absurdism dancing in the realm of theosophic speculation, with a dysfunctional family, a New Age neighbor, and an unfortunate pizza-delivery guy thrown into the mix.

The production is ambitious in its intersecting plotlines. Vicki, played by Zena Marie Franklin, unexpectedly received a black box in an airport, and ever since, she has been followed by every type of mercenary force seeking to acquire it. Now, she's locked herself up in her home, gun holster strapped to her chest, fully packing. Family wholesomeness is absent, with Mom and Dad separated but still living under the same roof and in turbulent communication. Dad (Zac Crofford) is cavalier in his rediscovery of playboy freedom. So immersed in libidinous urges is he that Vicki's best friend, Lenore (Kate Meehan), becomes his willful lover. Mom (Cynthia Mance) has taken to drinking with transcendental junkie Minerva (Lisa Scheps). To top it all off, a man dressed in a mock-up of Billy Idol or a 1950s greaser (Christopher Loveless) keeps mysteriously appearing in Vicki's home, demanding she hand over the box.

Eventually, we gather that the box is a missing particle of God that did not properly dissipate in its fall through Earth's atmosphere – a kitschy notion, but one that offers some philosophical fodder to chew on. However, the execution of the production falls short in places that could have used more focus. As an ensemble, the cast is comfortably cohesive, but, individually, each character seems intent on taking the spotlight from the others. Perhaps the point is this: We are selfish, cruel, and incapable of an intimate connection with another human being. But if that's the case, then it should be clarified in the presentation, through either excessively grand or intentionally diluted expression. (I am thinking of Hal Hartley's film repertoire.) The show hovers between what appears to be realism and a Beckett-like absurdism, which is okay, but I would have preferred an intentional exploitation of the genres so that I didn't have to guess at it. This discomforting confusion may be director Josie Tucker's problem to solve. The performances by Franklin, Meehan, Mance, and Loveless foster playful extremism in this kooky thought piece on life, death, and the power of God. The show's strengths are mostly represented in physical comedy, such as Cody Hudson's perpetually dead-then-alive body being tossed about and shoved into crammed spaces.

Conceptually, the premise is fascinating and contemplative. Coda Theatre Project is a company with loads of potential and a knack for choosing and offering theatre audiences fresh takes on classic themes. I hope that as their production résumé expands, so too does their depth in presentation.