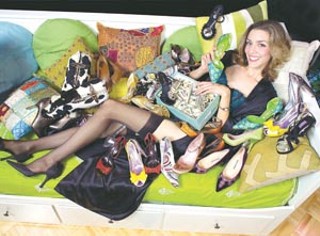 I have watched maybe two episodes of Sex and the City. The show does not make much sense to me. The characters seem ridiculously overblown and shallow, obsessed with their neuro-psychological selves or fleeting boy toys. I know there are loads of fans out there, saddened that there will be no more new episodes of this insipidly dull show. But hey, isn't that what the WE channel is all about – reruns! My point being, why produce a show like Bad Dates if this modern, New York chic woman lifestyle/archetype already exists in our cultural imagination? Answer: Why the hell not? Better yet, why not with the eminently talented, precise, and delightful machinations of Jill Blackwood in the single (pun intended) role?

I did not want to like the show, but did, kind of like when you get sucked in to watch a VH1 Top 100 Celebrity Breakups show. On set, we see the sole stage character Haley surrounded by countless shoes, some still housed in their boxes. She dresses herself before us in various combinations from her fountain of clothes. Her uninhibited impulse to switch into one outfit after another lessens any shock of seeing a half-naked woman on stage. It is as if we the audience are not voyeurs but close friends gathered in her strategically cramped apartment while she nervously prepares for a date. She speaks directly to us, completely unafraid of our watching eyes as she changes dress, skirt, shirt, and shoes, trying to decide the best outfit. She even asks us our opinion. Secretly, I think, "Maybe I should get another pair of heels."

Her stories in the land of singledom are all entirely decadent, and it's like watching Oprah while dishing dirt on the latest inner-circle scandal. Descriptions of all her tumultuous dates are vivid and engaging. Blackwood hops on stage like a sprite hyped up on 10 low-fat double macchiatos. She is smashingly silly prancing around in hosiery, frantic about the next encounter. She does an incredible amount of little things – zipping up her dress, tidying her hair, changing shoes – while managing to stay focused on the tales she spins.

Haley is also a single working mom, raising a teenager in expensive New York. She ignores little bad things she does in order to provide the finer things for her daughter and herself. Those shoes are not cheap! She discreetly launders cash from her restaurant job, owned by an Eastern European mobster boss who sits behind bars. When confronted with her illegal indiscretions, serendipity tidies the legal mess – or rather, a previous bad date becomes her saving grace in convenient closure.

Though certainly not a densely poetic contemporary play, Bad Dates is a guilty pleasure. Playwright Theresa Rebeck offers reflections on relationships, jobs, fashion, and dating through the medium of genuinely captivating monologues. Director Dave Steakley's flair for active blocking and popping movement never dulls in a play that teeters on mediocrity. But who needs grandiose theatre in the springtime? Indulge in lighthearted fare on occasion. Get out, show up to the theatre. It's better than watching reruns at home.