Lance Letscher's works in the D Berman exhibit 'Index' are at once sublime, profound, mesmerizing, gorgeous, subversive, and encompassing 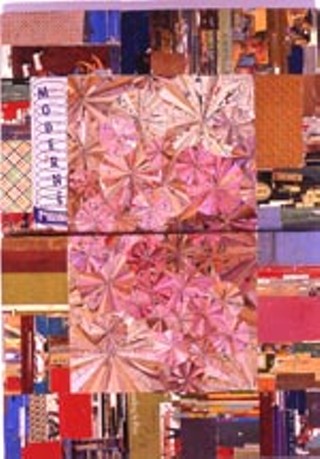 For the last year, I have approached writing reviews with trepidation. I am a visual artist accustomed to long periods of silence and strain to compose statements about my own work. It seems almost arrogant to write about others. Even though the preparation, research, viewing, and conversing is all part of a similar process, to be a scribe is excruciating for me. I want every word to count. I want my words to launch or further careers and to help viewers feel more at home with their own opinions. It is an impossible task.

I first saw Lance Letscher's work at James Gallery in Houston in 1996. Through a mutual collector I found out that Letscher lived in Austin and had no gallery representation. I can't express to you how nervous I was to ask him to exhibit in the humble gallery I was directing. The depth of stillness that must take place to create works of such beauty was beyond my grasp. I sensed it, but I had only two years of daily experience with the creative process under my belt. Each time I viewed his work, I was forced to re-examine my own. And as in times of childhood, I incorporated elements of his works into my own, wanting to understand where I must stand within myself to create on a level akin to his.

The current works are at once sublime, profound, mesmerizing, gorgeous, subversive, and encompassing. Each piece speaks to the other; there is continuity in concepts and iconography, but the progressive nature of ideas inspires no endpoint. For the creative process, a spiritual dimension within the artist must be carved out. As Mark Tobey, an American modernist painter, said, "This inner space is much closer to the infinite than the other, and it is the privilege of the balanced mind – and the search for an equilibrium is essential – to be as aware of inner space as he is of outer space."

During his process, Letscher keeps his options open, avoiding envisioning the final piece. He courts all the fragility and doubt that accompanies daily life. After the tedium of cutting thousands of scraps of vintage papers has ceased, a sense of excruciating chaos takes hold. It is at this point he asks to enter the creative process and puts down the bones of the work. He is completely blind and knows that he will see from within as he surrenders intellectual control, allowing the work to have its own voice. In that moment he becomes an Olympian listener. Finally, exhausted and exhilarated, closure is attained. He can move onto the next work and, again, be reborn.