Who really wrote Shakespeare's plays? In 'The Beard of Avon,' Amy Freed plays the question for laughs. 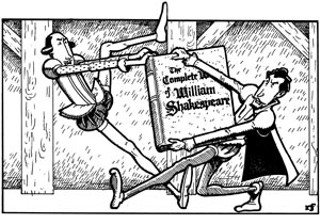 So how exactly did this middle-class schlub from a backwater burg in the Warwickshire sticks, the largely unlettered son of an illiterate glove maker, manage to write what are commonly considered to be the greatest plays (and some of the greatest poems) ever written?

That's one that scholars and a host of other folks have been scratching their noggins over for some 400 years now. The notion that li'l Will Shakespeare of Stratford, with merely a small-town grammar-school education, could have penned those three-dozen dramas of such stunning breadth and eloquence, so versed in matters of history, mythology, royalty, classical literature, the law, and foreign lands and cultures, strains the brain.

So maybe he didn't.

Maybe the guy we think of as the author of all those plays – you know, the pigeon-domed, heavy-lidded, fuzz-lipped fogey staring lazily out from every copy of The Complete Works of You-Know-Who – only signed his name to plays and poems that were actually written by someone else, someone who, for whatever reason, opted to keep his (or her) authorship secret. 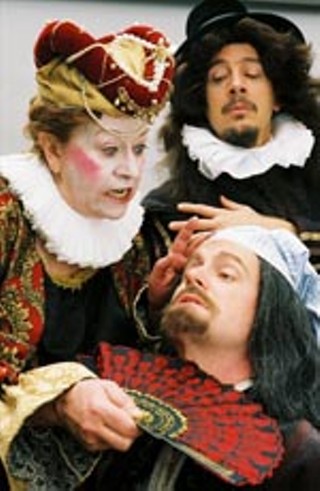 Queen Elizabeth (Jennifer Underwood) lays it on the line for Will (Scott Tesh) as de Vere (Marc Balester) looks on in Different Stages' The Beard of Avon.

That's the contention, anyway, of those people who can't seem to wrap their heads around the idea of teeny Stratford spawning a literary genius in the latter half of the 16th century. Through the years they – and by the way, "they" are an illustrious lot, counting among their ranks Ralph Waldo Emerson, Henry James, Mark Twain, Walt Whitman, Sigmund Freud, Charlie Chaplin, Orson Welles, Malcolm X, and present and former Supreme Court Justices John Paul Stevens and Harry Blackmun – have fingered a number of Elizabethans they believe could have penned the canon (and might have had cause to do so undercover): Francis Bacon; Christopher Marlowe; Ben Jonson; William Stanley, Earl of Derby; Roger Manners, Earl of Rutland; Sir Edward Dyer; Sir Walter Raleigh; and – hold on to your crown – the Virgin Queen herself, Elizabeth I. All told, some 80 candidates have been offered in the 21/2 centuries that this guessing game has been played. (Authorship doesn't appear to have been much of an issue for the first 150 years after William Shakespeare's passing.)

These days, the most popular alternative to "the Stratford man," as he's often referred to by skeptics, is Edward de Vere, 17th Earl of Oxford, whose credentials for authorship were touted in the 1920 volume Shakespeare Identified, by a gentleman with the infelicitous name of Looney. According to this schoolmaster's argument, the earl had the education (degrees from Cambridge and Oxford), he had the continental travel (Italy, France, Germany), he had the court connections (heir to one of the oldest earldoms in England), he had the theatre connections (patron of the Oxford's Boys and Oxford's Men), he had the writing experience (poems, masques), and he even had some life experience that corresponds to events in Shakespeare's plays. He also had a motive for secrecy: a social code among the nobility that made publishing under one's own name a big no-no. Despite the fact that his poetry doesn't compare terribly well to Shakespeare's and that de Vere died in 1604 (while traditional scholarship has held that new Shakespeare plays kept appearing through 1613), most of the current generation of anti-Stratfordians claim Oxford as their man. And claim him loudly. They constitute the largest group ever to have assembled behind a single alternative author of Shakespeare's works and have produced the most material in support of him, material which carries forward the Looney cause with the passion, and often the partisanship, of zealots. And which, it must be said, is countered at every turn with equal fervor and edge by the Stratford camp.

In recent years the authorship debate has risen to new heights of antagonism, with Oxfordians and Stratfordians squaring off against one another in scholarly journals, in books, on panels, on television, and, of course, on the Internet, like combatants in a holy war. The deeply seated and often transparent rancor found in their exchanges is enough to make the feud between the Hatfields and the McCoys – or to draw an example closer to home, the Montagues and the Capulets – look like a pair of elderly vicars fussing over the number of lilies on the altar. The Stratfordians accuse the Oxfordians of being narrow-minded class snobs, who can't bear the thought of a commoner writing the greatest literature in history, while the Oxfordians paint the Stratfordians as hidebound reactionaries, who blindly deny any evidence that would threaten the academic status quo, not to mention the thriving Shakespeare industry that employs the Stratford man for its poster boy. And though neither side has the kind of hard historical evidence that would unequivocally decide the matter for all time, there is precious little humility in the debates. Or humor.

Until about five years ago. Then Amy Freed, a West Coast playwright, waded into the fray with The Beard of Avon. After immersing herself in authorship literature, Freed dropped the Oxfordian premise in a comedic Mixmaster and whipped up a confection somewhere between Shakespeare in Love and The Front. (Does anyone even remember The Front nowadays? Woody Allen putting his name on scripts for blacklisted screenwriters in the McCarthy era. Would make a smart double bill with Good Night, and Good Luck, but I digress.) Freed's Will is, like the hero of the Oscar-winning film, a young man, albeit with less hair than Joseph Fiennes and considerably less wattage underneath it. A country rube enraptured by theatre who dreams of his name up in torches, he abandons his wife Anne for the London stage, where he's chosen by a vain and flagrantly theatrical de Vere to be the cover for the earl's excursions in dramatic writing. As it turns out, Will's native gift for poeticizing leads him to contribute some worthwhile rewrites to Oxford's plays, and before you can say, "Shake and Bake," Will becomes London theatre's script doctor of choice and front for just about every aspiring playwright in the aristocracy, including Her Majesty. In the meantime, Anne Hathaway follows her wayward husband to the big city, disguised as a man and ... well, that's plenty of evidence to demonstrate that Freed hardly took the authorship matter seriously. In fact, her script has it both ways, with Shakespeare's plays originating in hands other than those of the Stratford man, but giving the hick some credit for shaping them into the masterworks we revere today.

Following its premiere at South Coast Repertory in 2001, The Beard of Avon proved popular all over the country. Given Austin's interest in Shakespeare and deep irreverent streak, it was inevitable that it would wind up here at some point. Norman Blumensaadt, the artistic director of Different Stages, maybe the closest thing Austin has to a classical theatre company, says he's long wanted to do a play that makes fun of or has fun with Shakespeare. "I've considered Charles Ludlam's version of Hamlet, Stage Blood, and Stoppard's Dogg's Hamlet, Cahoot's MacBeth," he says. "So I liked Amy Freed's play." He's enlisted Scott Tesh (Different Stages' The Playboy of the Western World) to be his Stratford man and Mark Balester (A Perfect Ganesh) to take on the Oxfordian mantle. With the comedy's nonstop wordplay, humor both high and low, and ribbing of theatrical conventions and egos, they should have great fun and be able to defuse the tension of the authorship debate in the bargain.

I mean, it sure beats lowering yourself into the quagmire that is the deadly serious disputation over who wrote Shakespeare's plays. Even Amy Freed will tell you that. "If you start reading about this, you'll go mad," she told one interviewer. "Trust me."