Cyndi Williams' play 'Where Are They Now?,' based on the Parker-Hulme murder case, is a true crime drama that isn't about who done it but who survives it 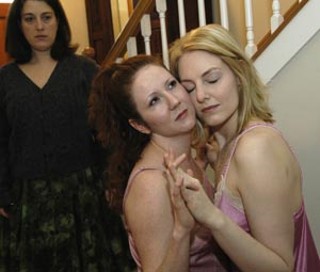 The Vortex, through March 25

Even in a day when we're steeping in true crimes, soaked by the constant stream of bloody sagas from print magazines, network newsmagazines, and cable documentaries, this crime continues to stand out, to fascinate. In a largely peaceful corner of the world (New Zealand), in a less violent time (the 1950s), a woman is bludgeoned to death with a brick in a stocking, her blood on the hands of two teenaged girls (one her daughter), close friends who shared not only interests and secrets but a richly detailed fantasy world. Their remarkable imagination and devotion to each other and the way it somehow found expression in this shockingly violent act was such that one can see why actress Shannon Grounds would be drawn to the story and ask playwright Cyndi Williams to base a play upon it, just as filmmaker Peter Jackson had been drawn to it for his 1995 film Heavenly Creatures. The story encapsulates our best and worst impulses, tested by the pressures of class and adolescence and exposing the extreme outlets sometimes found for them, all churning in complex characters. It is a dark pool, the depths of which could not be sounded by a dozen dramas.

The title Williams has given her play, Where Are They Now?, betrays its focus. It's not the sensational crime itself, although that's presented theatrically, or the uncommonly intense friendship of the girls, although that is certainly portrayed and quite effectively; rather, it's the wake of this defining event in the lives of these two women. At one point, a character asks how one goes on living after committing an act as brutal as the murder these young women did. That's the question Williams explores, turning it over and over in text that echoes itself like a cop trying to wear down a suspect, and while no definitive answer is really offered, the script's best guess is not easily. We see the women in adulthood, both having changed their names and attempted to build new lives. But whether they're drawn back to their crime themselves or by others, it is a stain that won't be washed away, and we see how it wears on them.

This is the third time that Williams and her collaborators have staged the play in the past year, and it shows. Both play and this production are admirably focused, like the one hot light that bears down on suspects in a police interrogation room. Williams, who also directs, keeps her cast intent on mining the internal struggles of the protagonists Pauline and Juliet, and the actors artfully chart a fascinating turn in character in the women before the crime and after. Portraying them as girls, they play to our expectations of them. Grounds' Pauline, described as dowdy and disdained, is the darker, harder one, evident in both her dress – an unflattering charcoal gray sweater – and her eyes, which hold the jaded glare of the outsider, the kid who doesn't fit in and knows it. Mikeska's Juliet, meanwhile, said to be a natural beauty and child of privilege, is the picture of softness all over: creamy skin, fair hair, pink sweater, dreamy gaze. Both figures radiate a powerful sense of resentment at being judged by their appearance and underestimated for it, and we can feel the bond forged in that. But something in the crime reverses the polarity of their personas. As Anne, the mystery novelist Juliet becomes, Mikeska's eyes ice over and her voice takes on a cynic's edge, as polished and unyielding as brushed steel. As Hilary, the librarian Pauline becomes, Grounds' edginess is shattered, leaving an all-too-visible brokenness in her being, regret and fearfulness haunting her every step.

The two lead players don't accomplish all this alone. Filling a crucial role as psychological foil is a third actor, Anne Hulsman, who pokes and prods the pair with challenges to their security and motivation; she pulls at their scabs, never letting them heal. Designer K. Eliot Haynes provides a similar function with his unsettling soundscape, its eerie, prickly rhythms and noises keeping us psychically off-balance. And choreographer Mandie Pitre's movements communicate beyond words the potent push-and-pull within these characters, between past and present, acceptance and rejection, unity and separation, wrong and right, living and dying. Ultimately, this production of Where Are They Now? does its source proud; it fascinates. It's one true-crime drama that isn't about who done it but who survives it.