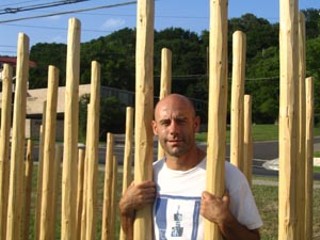 The Gates made a big impression on Austin artist Randy Jewart, a work that was simple, elegant, and powerful. "And I thought, 'We should have our own Gates project. We should have gates in all our parks, and our gates should look like wreaths, gigantic wreaths, with garlands and vines and flowers.' I didn't know that AMOA was going to do a Christo show this year. I didn't know until November, and then I was, 'We have to try to do it.' There's not enough time, but it's the time, right? There's not going to be a time in Austin when there will be that correlation between what that project was and what it meant to the international art community and this project and what it means to this community." Fortunately, Jewart had an organization in place and a couple of years' worth of experience planning and executing big public-art events. In 2004, he and Raul Garza founded Austin Green Art, a nonprofit that seeks to "create and install public artworks that reflect Austin's love of the natural environment." That might seem a narrow niche, but the brief history of Austin Green Art reveals the opposite to be true, as well as how much one small nonprofit can accomplish in less than two years. When the Austin Museum of Art hosted its Andy Goldsworthy show, Jewart collaborated with artists Beverly Penn and Margo Sawyer to transform Wooldridge Square into a giant Goldsworthy-esque sculpture, with bumps, lines, and circles made by volunteers using straw, leaves, and 200 bales of hay. Last summer Austin Green Art presented "Green Wave," an exhibition of seven environmental art installations in five spots across the city. In September, it hosted Dutch-American sculptor Mari Shields' first work in Texas with the Umlauf Sculpture Garden & Museum. (The sculpture, made from a fallen live oak tree, is on display at the Umlauf through September 2006.) That month it also created Cup City, a monumental collage commissioned by Starbucks for the Austin City Limits Music Festival incorporating more than 25,000 recycled coffee cups, aluminum cans, and plastic bottles. (Legge Lewis Legge of Austin designed the work.)

Now, Austin Green Art is on to The Gates – or at least its local variation. In Jewart's sort of fast-cheap-and-out-of-control adaptation, the project is centered on Earth Day 2006 – April 23 – and will feature 100 "Green Gates," 12-foot cedar frames, each displaying a banner of original artwork, installed in parks and green spaces all across the city. The final locations have yet to be set, but they might include Pease Park, Zilker, St. Edward's University, UT, Huston-Tillotson, and neighborhood sites. Twenty-five of the Gates are designed by kids working with "Idea Man for the Future" Ian Cion. It's part of an overall plan to develop a new citywide celebration around Earth Day, with a revue of music, dance, spoken word, and short theatre works at the Umlauf, a benefit concert, and more. "For me, this project is about what's happening right here with other artists and environmental groups, and corporate sponsors, and the community-building that can take place through a project of this scale," Jewart says. "It's a lot of logistics to coordinate on a ridiculously short time frame, but we're bumbling our way through it with good intentions, and people are responding."

Even Jewart is surprised by how far Austin Green Art has come in so short a time. "It's way ahead of where I thought it would be ever. I was here 41Ú2 years before I ever started this project and was really frustrated with the arts scene here. So my internal expectations weren't super high, but at the same time I think that if we can keep building on the kind of things we're doing, we should be the biggest arts organization in town, just because we plan to do things with the community in the parks and in public space."

For more information, go to www.austingreenart.org.