Spank Dance Company's 'Greyhounds and Other Virtual Ways to Travel' may not move you to the next plane of existence, but its force and beauty will make this plane much more satisfying 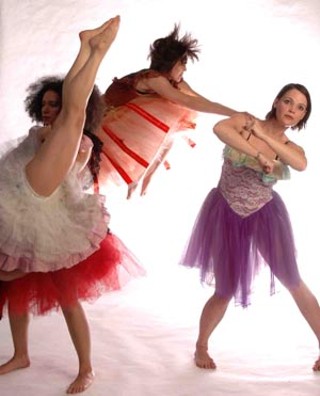 There is the imagination and there are facts and there is opinion.

I imagine, for example, that if you were to witness a ballet, even the most expertly performed and beautifully choreographed ballet, you would be best served by the experience if you had a working knowledge of what the art comprised: the moves, the timing, the form's standards and the surpassing of those standards, the long history that provides a foundation for the advancing architecture of such kinesis, and so on. Otherwise, you might well find yourself, in the midst of all that sublime and rarefied beauty, yawning.Ê

And it is a fact, for example, that much modern dance, especially that assayed by self-consciously "cutting edge" or provocative companies, can be redolent of gimmick and movements or scenarios rendered mostly for what critics are pleased to deride as shock value.

It is my opinion, finally, that with Spank Dance Company, you don't have to worry about either of those disappointments; because Spank Dance Company consistently soars to the best of both potentials without dragging itself through the mire of the worst of either. Its current show, Greyhounds and Other Virtual Ways to Travel, is a case in point. Choreographer Ellen Bartel, guiding the performers not only through their powerful paces but over the devastation of a recently burned-down studio, has added a new and exciting wing to the museum of her company's work.

Greyhounds is broken into three parts: Memory, Technology, and Intellect. The Memory part, featuring dancers Mari Akita, Dawnerin Larrimore, Debra McAdoo, and Kayo Tsujimoto, is the most theatrical of the three, with complexly fanciful costumes of tulle and lace and an original score by Andy Hadaway. The dancers struggle fiercely with large flat rocks, brandish and animate a pair of inflatable adult dolls, and interact with each other in ways that are interesting to the eye and which spur the audience's sense of narrative. There is a brief section, highly effective, in which the south wall of the stage is treated as if it were imbued with the gravity normally associated with floors; at one point, in a maneuver more effective than many of actual memory's illusions, the performers appear to push that immovable wall hundreds of yards away.

The Technology part features Chika Aluka, Ellen Bartel, and Roberta Villalon moving athletically, like well-timed cogs powering a complex biomechanical engine, while a rapidly switching series of projected images – of our world and the people and situations in it – fill the entire south wall. This part, performed with the music of Steve Reich's So Percussion, put me in mind of a live deconstruction of the film Koyaanisqatsi.

The third part, Intellect, is also scored by Hadaway and sounds – and this is, goddamit, a compliment – like an episode of Star Trek with a soundtrack by Luciano Berio. The section begins with the entire troupe posed statue-still for five minutes before erupting into motion that seems set in some abstracted Greyhound station of the future, leading them eventually to a departure, one by one, upward (via stairs) and toward a bright, trisected light – the souls of humans moving from one plane of existence to the next.

Greyhounds and Other Virtual Ways to Travel won't necessarily move you to the next plane of existence with its force and beauty. But, watching the show, listening to the music, musing on what Bartel and her dancers are suggesting with their hints of narrative and (always) the movement of bodies from an interesting dark to a more promising light … it'll make this plane of existence a much more satisfying interlude.