Neil LaBute's 'The Shape of Things,' staged by a chick and a dude productions, destroys the kind of cutesy relationships usually reserved for melodramatic chick flicks 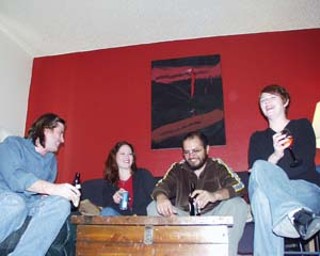 Normally, art would have you believe that the moment that Adam and Eve made their first appearance as man and woman, they made a mad dash for the nearest fig tree, obscuring the artist's perverse point of view in order to keep censors happy.

"I loathe art that's not true," Evelyn, the MFA student, tells the undergrad Adam in the museum where he works as a security guard. She's just crossed the ropes around a sculpture of a nude intending to spray paint over an obstruction on its genitalia, like some art terrorist. He coaxes her away, and she uses the spray paint instead to write down her digits so he can call her. You root for the nerd with the bad haircut and Costello frames to get the girl. It's a sweet beginning, which is not what you'd expect from the filmmaker and playwright Neil LaBute, who has the topic of cruelty cornered the way David Mamet does anger. But The Shape of Things, staged here by a chick and a dude productions, destroys the kind of cutesy relationships usually reserved for melodramatic chick flicks (cinemaelectroshocktherapy).

As his relationship with Evelyn carries on, Adam relinquishes his independence, allowing her to transform his look, Fab Five-style, from hipster drab to yuppie chic. And there's nothing passive or seductive about her technique; she tells him outright that he'd look "better if." Adam starts growing his nails, getting rid of his asymmetrical haircut, dressing in Abercrombie and Fitch, wearing contacts, getting into shape, and even going under a cosmetic surgeon's knife.

His best friend, the athletic Phillip, is the first to notice the changes on a double date and tells him that he is essentially whipped. Phillip is planning an underwater wedding with his fiancée Jenny, otherwise known to Adam as "the one that got away." When sweet-tempered, innocent Jenny becomes attracted to the made-over Adam, he asks her if she'll be able to "take the plunge." It would've been very easy for a chick and a dude productions to overplay LaBute's irony, but they manage not to.

Kelsey Kling's Evelyn has an air that is stubbornly insincere, and her haughty attitude cuts through Ben Wolfe's Adam, who proves that he cannot only hold a regal role but a meek neurotic one as well. He nurtures the audience's pity, but because we don't really get a glimpse of Adam's persona before the change, his character doesn't seem to really change at all, saving the modifications for his outward appearance only. He still makes abundant pop-culture references, snapping lines such as, "I'm sure glad I don't have a pet rabbit." Director Shanon Weaver lets things "change shape," but certainly doesn't propel the actors with the energy necessary of LaBrutality. Still, the show moves steadily toward the bare-naked truth at the show's climactic twist, which, without giving too much away, offers a torrential spin on the biblical parable, questioning whether moralists belong in an art museum any more than Adam and Eve belong in Paradise.