Idea Man for the Future

Ian Cion is out to build a better world, through public art

This artist has chutzpah. Before he moved to downtown Austin in July 2005, Cion had taught art to youths in the Bronx, where the harsh realities of working with economically disadvantaged families tempered his youthful idealism. He told me distinctly, "I choose to be an optimist." He wants to develop pilot programs that can be applied in other cities and use existing technology to do things like project children's art in hospital rooms. He is motivated to create practical local projects and also to propose hifalutin global solutions. That's why I decided I'd start calling him "Ian Cion: Idea Man for the Future."

Cion's background includes a creative writing degree from Columbia University; and travels to, and work in, Santa Fe, Santiago, Bangkok, Amsterdam, Jerusalem, and New York. His inspirations are diverse: Basquiat, Matisse, Bruce Mau, Buckminster Fuller, Diego Rivera, Georgia O'Keeffe. Da Vinci, Friedensreich Hundertwasser, Gaudi, Niki de St. Phalle, and Suzi Gablik's book The Reenchantment of Art. During our interview, it became clear that his experiences in the Bronx were also a catalyst for his current artwork. He worked with an organization called Learning Through an Expanded Arts Program – LEAP – that offered New York City public schools programs promoting cultural understanding, violence prevention, and literacy through the arts. Through the literacy program, he worked on a study in collaboration with NYU to determine the effects of using the arts to teach literacy. "The outcome was definitively positive," he says. "This was important for me, in that it confirmed my belief in the measurable social and educational force of art. I also realized through this endeavor that my relationship with my students and the act of teaching them and bringing them joy was my art project, more even than the visual works I was creating during that time."

Cion's recent artwork reveals his innovative approach to achieving cultural enrichment, aiming to integrate it into the actions and architecture of our mundane lives. Cion has a preference for large-scale public art and consistently proposes highly decorative motifs applied to functional public spaces. He wants visual displays on the sides of buildings rather than off-site billboard space: on power plants, power lines, smokestacks, hospitals, and schools. This is a different mindset regarding public sculpture, a modern take in distinct opposition to the tradition of art in the park – the bucolic getaway of a setting like the Umlauf Sculpture Garden. Public sculpture serves as an indicator of civic and economic health and is usually placed on a pedestal of sorts. But there is a certain efficiency to including the guts of a city as art space, and as cities get denser and public spaces like our parking spots get smaller, why not decorate in more odd spots? Location, location, location. This is an artist with a truly democratic vision of public art, one that communicates with a broad audience, is egalitarian and inclusive. Also, the flexibility of his work gives control to its owners, letting them use designs that are trendy one month and classically timeless the next.

One of the inspirations for this work occurred when Cion read about active video camouflaging, the use of video technology to camouflage warplanes. Live camera feeds can send a picture of clouds and sky onto the surface of the airplane so that its outer appearance mimics its environment. Having read that wind farms were unsightly and lowered property values, Cion decided this "smart skin" would be the perfect solution to that problem. Point cameras to the sky and project its ever-changing beauty onto the windmills. What developer could argue with that? Some might object to potential for bird fatalities that rendering the turbines invisible could cause, but Cion says he'd "use video loops of regional predator bird species overlaying the live sky footage." This is a positive concept for the future!

Cion is an ambitious man. If this smart skin idea were to take off, the possibilities are endless. Let's say affordable, flexible, ecologically healthy, even organic video screens are put on city-owned facilities, power plants, schools, etc. Think how easy it would be to put up seasonal decorations! We have the beginnings of this phenomenon already in Tokyo and Times Square and in sports stadiums where billboard images change constantly.

It takes cooperative artists with team spirit like Cion to open our minds to more peaceful and civilized uses of military technology. Historically, certain artists have stood out as forward-looking, engaged in attempts to change society and history. Diego Rivera is a great example. Though he worked for private families and various governmental institutions, he managed to maintain his working-class idealism. In addition to artists such as Rivera, Cion cites "thinkers such as Buckminster Fuller and Friedensreich Hundertwasser, who sought to provide a sense of personal responsibility and affinity to place by the people that inhabit it through freeing up their ability to interact with it."

A lot of people like decorative embellishment in their homes and in their cities. When Bauhaus architecture took off as a global trend, some argued that it looked like the gulag – cold, hard, and unfeeling. Proponents would say that it's efficient, stripped down to the essentials, no fluff. Adding decorative elements is the choice of the owner, not the architect. The architect uses the mantra "form follows function," and that's it. So, owners of these cubic cement homes are set free to add their own taste, their own fabrics and look. Only if left unloved, unlived in, and unlandscaped do they resemble jail cells. This theory can apply to our urban infrastructure as well. Do we attempt to faux finish, disguise, and hide our necessary utilities like power lines? Or do we adorn them whimsically and look at them and think, "Cool. I have power in my house and office. I really want that, and I've got it, so why hide it?" I asked him how he is inspired by technology.

"I am very interested in emerging technologies," he replied, "especially in the transformation we are experiencing away from the concept of doing the least damage we can do to the Earth, to the idea of our role as actually producing an economy of things that are actually good for the Earth. I am driven to look toward ways in which advanced technologies can be used for the most positive and healthy ends. I see art as essential in propelling the most exciting technologies out of the service of sales and manipulation [and] into the terrain of creating a culture of beauty and comfort that is accessible to everyone, and that is no longer toxic."

Utopian idealism always comes with practical hurdles, but Cion is forward-looking and motivated as all urban planners and many artists are. If cities have to have telephone wires and they have to be above ground, Cion says, candy-stripe them so that they remind us of rainbows, not an unsightly blight that we are forced to live with. Let's consider the high-art and low-art implications of his choice for locating the work: He wants to paint the plumbing, he wants to barber stripe the smokestacks, and he wants to put a mandala on every manhole cover (manhole covers in Japan are amazing). 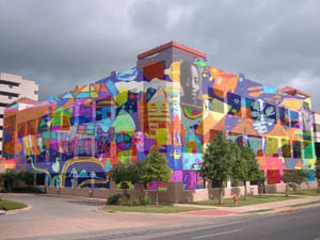 By the Children, For the Children, digital print by Ian Cion
Austin Chronicle: How does aesthetic decision making influence other social agencies? Ian Cion: I think it is important to recognize that every decision we make is one we have to live with, and that it is important to make good decisions that not only bring immediate satisfaction, but long-term, intergenerational rewards. Our landscape is infected with quick-buck solutions, where short-term goals have taken precedent over long-term. In thinking aesthetically, we are guided to seek what gives meaning and pleasure in a real way. We have a responsibility to protect and provide for each other, and for future generations. We have a responsibility to protect the Earth. I don't see how we can do this if we are not willing to get beyond doing things like producing vinyl billboard after vinyl billboard to sell a two-week cheeseburger special on a material product that has a long-term and severely poisonous effect.

IC: I think if people want to be out in a park or on a particular street, there is a kind of safety in numbers happening, but also a safety in the fact that people know when they are being respected. If the place honors those who pass through it, they feel it, hopefully, and that sense of honor creates a kind of dignity, which makes acting like a jerk less of an option.

AC: Is temporary art like a mural more or less important than permanent forms?

IC: I have always really liked graffiti and temporary forms of art. I like graffiti in part because it redefines property ownership or at least questions it. Especially in urban contexts where a horrible and dehumanizing aesthetic has been imposed on a community, graffiti gives a beauty to it, but also strength, defiance. In fact, bombers like the Tats Crew in the Bronx should be working with systems biologists and architects to create the cathedrals of our day. If high technology can be introduced into the urban fabric in a way that is accessible to street artists, tagging could be very exciting and more interactive, more luminous in the years to come.

IC: I don't think all artists are morally obligated to lead society in progressive social change, but I do feel a kinship with those who see this as part of their purpose. In some ways, just being an artist is progressive. It is a hard road in many ways, and there's a lot of rhetoric out there that undermines the artist, so there is a kind of revolutionary quality to taking up the profession. But also, making art just feels good; it's liberating. Giving yourself the pleasure of the creative experience makes you more open-minded, no doubt, and happier. This is progressive social change; progressive personal change leads to progressive social change.

AC: How does your art relate to futuristic idealism – hippie utopian stuff?

IC: I'm a big fan of utopian thinking, especially guys like Paolo Solari. I think optimism and idealism are actually very responsible ways of living. If you don't envision a positive future, there is no way to arrive at one. Like Gandhi says, "We must be the change we wish to see in the world." That's the truth. I think that there is a false notion out there that pessimism is more practical, more realistic. But I don't think you can just say everything is going to be fine; you have to actively engage in community and make the positive reality.

AC: How does your art relate to urban planning like Smart Growth density?

IC: Again, I've learned a lot from Hundertwasser, to read paintings like maps, to create plans like works of art, to use my creativity to meditate on wellness. I think we are living in a renaissance period of interdisciplinary studies, and art is going to play a big role in the emerging bio-informational architectural environment.