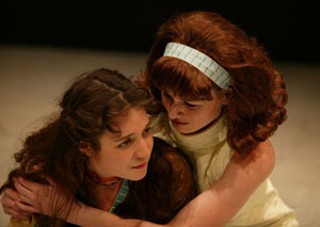 Waiting for the play to begin, two little girls giggle and run across the stage. Their inconspicuous entrance and exit, appearing without provocation, stirs intrigue. These are the sisters, Ismene and Antigone, before the horrors of war. House lights go down to black, then as if in moonlit shadow, a man rappels from the grid above to the floor. Two others slide down ropes to land on the stage. Flashlights survey space in a frenzy; fog and smoke billow thickly as from a gas canister explosion. Alarms wail in warning, and soldiers shout. A double death with machine guns happens instantly. Listless bodies are strewn about. What a riveting start for Mary Moody Northen Theatre's Antigone.

The setting is 1960s America; the war, Vietnam. Sophocles' Creon, the tyrannical ruler refusing Antigone's wish to bury her brother with honor, is analogous to JFK. Hippies, beatniks, conservative square types, and dark-suited secret service agents function as other political actors in this version of the classic Greek tragedy. Director David Long attaches relevance to the production through a historical narrative epitomizing loyalty, love, and compassion opposing cruel and hateful laws of the state. The peace generation of the Sixties becomes the youthful idealism and revolt in Antigone. Women in glittery silver go-go boots and short dresses dance as a chorus of synchronized cyborgs. Their cheekbones accented with small masks offer an illusion of chiseled fashion models. When Ismene stands next to her sister Antigone, we see an obvious clash of culture. Ismene wears a neat but colorful suit, her hair tightly sprayed into a wave; Antigone is clad in earthy patterns and flowing skirt, her hair long and tussled. The theme is repeated in Leilah Stewart's scenic design, with its modern-deco palace gates and balcony and Creon's profile wallpapering two sections of the space in homage to Warhol's pop art reproduction.

Unfortunately, the sensationalism and cleverness of concept doesn't plumb the depths of this Greek tragedy. Julia Trinidad portrays Antigone with a flagrant monotone in voice and temperament. She cries and exhorts puffs of rage at her sister, her heartless uncle Creon, and her fate, but opportunities for resonant speeches are lost in a sea of expressive indulgence. As Creon, Philip Owen manages a worthy performance overall, but he is at his best when convincing his son Haemon that his bride Antigone must be killed for her insolence. Surprisingly, some of the most enthralling performances come from actors with the least amount of stage time, such as Robert Burkhalter's tentative Guard. Ev Lunning Jr. is indubitably booming and intimidating as Tieresias. Nigel O'Hearn's Heamon projects his confused heart in subdued intensity, embodying one of Sophocles' messages: To love one means to sacrifice another love.

In creepy closure, Antigone's body hangs suspended above the floor. Death calls out in atmospheric sobriety. Powerful images linger, but directorial myopia in guiding some of the novice actors blurs the impact. Regrettably, the production's thematic concept seems to have a higher priority than thoroughly defined characters.