'Oh Mother' is refreshingly eclectic in its celebration of its theme, its dances as individual as the children of the women who dance so eloquently in it 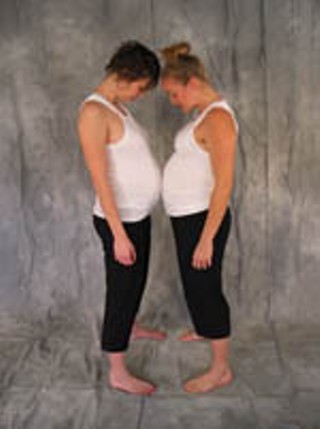 There's something about that belly. Almost perfectly spherical, extending outward from the body like a globe of flesh, clearly of it and yet not, as its shape and size are so out of whack with the natural proportions of the body from which it protrudes – it's both unnatural in appearance and the most natural thing in the world, its shape heralding new life to come, a turning of the generations, a renewal of the cycle of all things. It's mesmerizing, this belly, and when Allison Orr slowly turns it toward us, allowing us to steep in its roundness (like the vowel nestled between consonants in the word "Mom") as Renee Fleming sings "O Mio Bambino Caro," it becomes a thing of profound beauty.

That sort of deep appreciation of the expecting female form might be expected in a program titled Oh Mother, but don't assume that Orr's concert of dances by Austin choreographers "in various stages of motherhood," as she puts it, is merely a parade of women with child idealizing their roles as bringers of life. We feel the weight of that belly, too, how it feels to lug all that developing life around, in Caroline Sutton Clark's "Sextet for Twelve," in which a half-dozen dancers in the family way balance mythic images of motherhood – a stately promenade with each dancer carrying a plastic bag filled with water and a goldfish swimming in it – with pregnancy at its most mundane: trying to sleep with that great ball around your middle, walking on legs that feel weighted, perpetually being called to the bathroom. We feel the pressure brought to bear on mothers with careers in Sutton Clark's "Trio From Wee Beasties," wherein Sharon Marroquin is buffeted and bounced between Amanda Evans and Megan Knotz, who accuse her of not giving enough to her child or her art. We see that hidden life once it's burst into the world, in all its messy, diaper-wearing, babbling, exuberant, heartbreakingly vulnerable flesh (via video of Leticia Rodriguez's wee ones in days past) and witness in her dancing the singular joy and pride that a mother feels as her children grow and come into their own. The frantic movement that surfaces periodically in both Marroquin's "Hold on Tightly but Not Too Tightly," with a harried mom briefly breaking with routine to express her deep passion, and Michelle Nance's more abstract "Accumulation: From 2 to 3" suggests a sense of being almost overwhelmed, a feeling familiar to most if not all parents. Indeed, the solo by Nance (whose command of her body in it is riveting), and the duet by Leslie Dworkin (danced with Kent DeSpain), take us so far beyond any obvious representations of motherhood that their evocations of it are at best impressionistic. Which is to say, Oh Mother is refreshingly eclectic in its celebration of its theme, covering the sacred and the profane, the physical and the emotional, the personal and political, joys and terrors, its dances as individual as the children of these women who dance so eloquently upon this stage.

Still, there's something about the belly. In full bloom it's like nothing else in human experience, a swelling of our form into some sort of geometric ideal: a circle, a ball, the sun. It is both sign and signal of something as perfect as those forms coming forth, and to see it onstage in such numbers inspires a bit of awe. Orr is wise to that and taps into the wonder of it with a winning simplicity, both in the solo referred to above (charmingly titled "First Duet") and in the closing trio, "Welcoming Swell," danced with Andrea Comola and Jennifer Tietz Gwin. Each dancer gets a balloon and blows it up until it's about the size of her stomach, the curve of one mimicking the curve of the other. Then the balloons – one red, one yellow, one blue – are bounced high, and in that playful action somehow parent and child are both present, and motherhood soars into the sky.