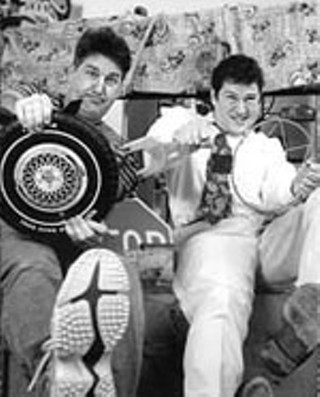 It's a new year, and at the State Theatre that means much that's new, including the artistic director. Michelle Polgar, who was appointed acting artistic director following the termination of Scott Kanoff last October, has been named to the job for good, and as one of her first official duties, she's announced some new additions to the State season. In place of the new play Welcome to Arroyo's, Triple Espresso, a high-energy comedy centered on the reunion of a once-aspiring comedy trio, has been booked for a seven-week stand starting April 5. The show is quite the phenomenon; its original production has been running almost 10 years in Minneapolis and spawned a San Diego production that's in its ninth season. On the heels of its Austin premiere is the return of Pat Hazell, onetime Seinfeld writer who relocated to Austin after the success of his solo show The Wonder Bread Years at the State. This time out, he brings Bunk Bed Brothers, a collaboration with Seinfeld colleague Matt Goldman in which two brothers share an evening in their childhood bedroom and reminisce about their past. The comedy runs May 31 to June 18. Also returning is Steven Tomlinson with his highly praised monologue American Fiesta in a summer revival, July 19 through August 6. That's a world of changes, but the State has left old Will in the world: The scheduled production of Shakespeare's beloved comedy Twelfth Night, produced in partnership with the UT Department of Theatre & Dance, will open as planned Friday, Feb. 17 with preview performances on Feb. 15 and 16. For more information, call 866/4GET-TIX or visit www.austintheatre.org.