In the first person

When I opened the front door on the morning of Jan. 31 and saw that the bread fairies had visited during the night, I knew that my family had been given an opportunity to experience Austin's first First Night in a very special way: The bread on our porch was one of 2,006 freshly baked loaves delivered to Austinites that day as part of artist Jaclyn Pryor's contribution to the year-end cultural celebration. Recipients of the bread were invited to march together in the event's Grand Procession that evening and then to take part in a ritual of sharing – a literal breaking of bread – with their fellow citizens. 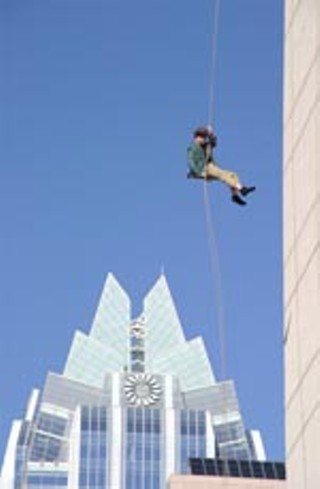 Approximately 10% of those who received bread that day showed up for the parade and made the march from Ninth and Congress down to Cesar Chavez Street and west to City Hall. Dressed in white (mostly) and holding aloft our loaves, we were hardly the most arresting sight in the procession – which included an "Antarticar" attended by an army of human-sized ants, a giant puppet Stevie Ray Vaughan (among many other gargantuan papier-mâché figures), Mardi Gras Indians, a rolling pirate ship, a unicycle-riding ostrich, and more – but we were nevertheless cheered on by the crowds lining the streets.

And they were indeed crowds. Given that this was a new and untested cultural event, the public's interest was the great unknown, and there had been legitimate questions as to whether Austinites would turn out in any numbers. I can testify that they did, lining both sides of the street the full 10 blocks that we walked, shoulder to shoulder, four, five, six, eight people deep, all along the route. Remarkable is putting it mildly. That crush was evident on into the night. During the five hours we attended, my family took in 10 of the evening's 25 events, and every one drew no less than a few dozen people and some drew into the hundreds. (Watching the five-deep crush of bodies pressed against the glass of the Frost Bank Tower lobby to see Sharir+Bustamante Danceworks perform José Luis Bustamante's 20-minute Court Dance inside, I was struck by the notion that more people were probably seeing the company at that moment than routinely see it perform one of its twice-yearly dance concerts.) And getting from one event to another always meant navigating a stream of pedestrians on the sidewalks. Police estimated total attendance at more than 100,000, and based on our experience, that doesn't seem far-fetched at all.

As encouraging as the turnout, however, was the quality of the art. While our sampling was admittedly limited, what we saw showed a consistent inventiveness in taking over downtown spaces: climbers rappelling down the side of a hotel on which Kong-sized images were projected, modern dancers gliding through a skyscraper lobby or weaving among pedestrians on a crowded sidewalk, a "dragon" consisting of illuminated tents floating on Town Lake, a soap-flake snow blizzard blowing beneath the live oaks on the First Street Bridge's north end. To see these familiar locales transformed by art was slightly disorienting – and so delightful. The First Night works offered sometimes lyrical, sometimes hypnotic images that are now fused in the memory with these community sites.

That's part of what First Night organizers were aiming for, and they're very pleased with the event's debut. First Night Austin Executive Director Ann S. Graham reports that it "really exceeded my own expectations – for audience attendance, but also artistic impact of the event and the overall sense of a community in celebration. Public response was wonderful, and everyone I speak with still talks about how friendly and good-spirited everyone was. The artists truly gave their all, both in the creative process and also in the presentation. And all seemed to draw from the energy of the audience. Sherry Gingras, artistic director of the Djembabes drumming group, said that her second Djembabes performance was the best the group had ever done … because of the public response, enthusiasm, energy of the crowd."

Graham was out and about all through the 10-hour event, dealing with minor problems but no major ones. And in fact most of the issues she had to address resulted from the unexpectedly large turnout: They "ran out of programs, ran out of vendor food, ran out of TP at City Hall – those kind of things," she says. She was not so busy that she missed the art. "I saw every outdoor, site-specific work, along with my 'heart and soul' of the event, the Grand Procession," she says. "It was magical … eclectic, creative, energetic. One sensory delight after the next. The cultural and artistic diversity was exceptional … and yet I can only think ahead to year two and how we can build upon this success and make it even richer and denser."