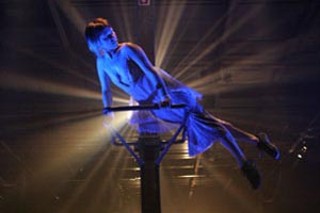 1) Circus Maximus (UT Wind Ensemble) The premiere of John Corigliano's work for concert band, tautly conducted by Jerry Junkin, captured in a profusion of musical styles and sonic extremes, from deafening roars to muted whispers, the character of our culture in all its violence, pride, impatience, disconnectedness, and sense of mourning to a degree that was unnerving.

2) Night of Four Moons (Sharir+Bustamante Danceworks) A dream, brief but oh so sublime, with a pajama-clad dancer visited by four fanciful figures all in white, seemingly on holiday from commedia. Their playful movement in and out of Amarante Lucero's sumptuous, almost sentient lighting made for a visually exquisite and enchanting dance – and a triumph for choreographer José Luis Bustamante.

3) The Match (Deborah Hay Dance Company/Dance Umbrella) Strange, funny, obvious, and obscure, this work by Hay and her quartet of virtuosic dancers moving – and not moving – to the same set of choreographic challenges made me aware of time, of a ticking in my head, and gave me a fresh sense of how each of us singularly moves through the world and perceives our movement.

4) Whispers of Heaven (Blue Lapis Light) Dancers with petals spilling from upturned umbrellas, in midair suspended in luxuriant lengths of white material, on a wall perched sideways, bathed in thick crimson light – Sally Jacques' latest site-specific dance steeped us in lush, radiant visions of beauty that, for an hour, stemmed the rising tide of brutality in the modern world. 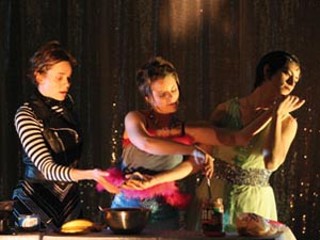 5) Light: The Holocaust and Humanity Project (Ballet Austin) Without ever showing a swastika or shower, BA Artistic Director Stephen Mills managed to convey some of the profound suffering of those caught in that dark stain in human history. His spare, stark choreography, bravely executed by his company of dancers, distilled experience into primal emotions: violation, pain, despair, but also hope.

6) The King and I (Forklift Danceworks) Allison Orr's expansion of her dances with Elvises (impersonators, anyway) into a full-blown choreographic celebration of all things Presley rocked with ingenuity and wit (a dance making fried PB-and-banana sandwiches!); smooth moves by dancers Orr, Karly Dillard, and Theresa Hardy; and a whole lotta heart. Viva Las Forklift! Long live the King!

7) Vespers of the Blessed Virgin: 1610 (Texas Early Music Project/Schola Cantorum of St. Mary) Presenting Austin's first full version of Monteverdi's masterwork was a dream come true for Jeffrey Jones-Ragona and Daniel Johnson, and they sure made it dreamy, with an orchestra of all-star musicians masterfully in tune with the work's grand scope and singing – especially by Kathlene Ritch Brown and Christopher LeCluyse – so divine as to have made angels weep.

8) Elektra (Austin Lyric Opera) Richard Strauss' take on this ancient tragedy is nothing if not demanding, but ALO rose to the challenge, led by Artistic Director Richard Buckley, a fury in the orchestra pit. The production's twilight world of bloody murder and retribution gave us the opera in all its complexity, cruelty, and humanity.

9) Conversations From Opposite Sides of the Room (Mirror Images) (Conspirare) On just a puff of breath (well, and the magically melded voices of this choral ensemble), we were transported to the serene shores of Walden Pond and rocky coasts of Northern England, among other locales. A revivifying vacation through song and the glorious artistry of Craig Hella Johnson and chorus.

10) Detour (Ariel Dance Theatre) This ensemble-created work about three people's close encounters with death careered back and forth between dance and drama, but choreographer Andrea Ariel and NYC theatre artist Leese Walker had a sure hand on the wheel, blending their respective art forms, as well as humor and gravity, with playful, disarming grace.