1) Americamisfit (Salvage Vanguard Theater) Playwright Dan Dietz dusted off the lost saga of our country's first serial killers and set them at the bloody heart of an American history lesson on the place of violence and revolution in our national character – and the price we pay for it. As politically insightful and provocative as any script this year, set to a rockabilly beat that quickened the pulse of this drama to a reckless, thrilling rhythm and sent its focused and fearless ensemble into a dance fever.

2) American Fiesta (State Theater Company) The tale of one man's quest to complete a collection of vintage dishware became, in the hands of gifted monologist Steven Tomlinson, a meditation on the state of the union – both our divided country and matrimony, particularly between two members of the same gender. Typically witty and complex, and as artful and elegant as the lines that run below the rim of Fiestaware bowls.

3) An Evening With Anna Deveare Smith (Zachary Scott Theatre Center) This one-night visit to Zach revealed a master theatre artist at the top of her form, embodying people she's interviewed – including several Austinites – with uncanny skill. But more compelling was the manner in which she spoke powerfully to issues of justice and morality, and the sense of authority she brought to them. That rare occasion when you felt privileged just to be in the audience.

4) Keepin' It Weird (Zachary Scott Theatre Center) Our voices, ourselves. Zach artistic director Dave Steakley took the testimony of some 200 Austinites, past and present, and wove them into a spectacular theatrical essay on what this city means to the people who live here, celebrating our abundant eccentricities but also our abiding faith in this place itself. 5) Varekai (Cirque du Soleil) Icarus' fall to earth was the launching point for a return to the sky in the visionary circus' eagerly awaited return to Austin, with act after astonishing act of aerial acrobatics (set in one of Cirque's trademark dream worlds, extraordinarily strange and gorgeous) communicating the exhilarating sense of freedom from gravity.

6) Match-Play (Rude Mechanicals) Riffing off Deborah Hay's dance The Match, the Rudes submerged into Deep Thought, concocting an absurdist household where everyone – livestock and appliances included – was trying to pry open those doors of perception and raise their consciousness. This intellectual ballet, danced with vigor and comic verve, tickled the brain into giddiness.

7) The Intergalactic Nemesis: Twin Infinity (Salvage Vanguard Theater) The third and final chapter of SVT's improbably successful salute to retro radio sci-fi put the year's other big trilogy-ending space opera to shame. With its pitch-perfect ear for period slang, roller-coaster pacing, and crackerjack comic cast, this spot-on spoof of old adventure serials rocketed me out of this world.

8) Everything the Traffic Will Allow (Austin Cabaret Theatre)/At Home With Dick (Rubber Repertory) Life is a cabaret – quite literally here. In the former case, Klea Blackhurst's revue reviewed the life of Ethel Merman, and the young singer's vivacity, charm, and voice that could call the stars home from heaven won her converts for La Merman and fans of her own. In the latter, local songwriter Dick Price built his show from autobiography, offering a tuneful tour of his life and loves as he toured the rooms of his north campus apartment, an offbeat touch that gave his show an uncommon intimacy.

9) Fear of a Führer (UT Department of Theatre & Dance) Playwright Abi Basch's enigmatic exploration of enemies and betrayal in wartime generated more questions than answers, and yet its mysteries in suitcases, strangely beautiful dances, and haunting score by Adam Sultan and Jon Nelson, performed in the catacombs beneath the Brockett Theatre, made for one of the year's most mesmerizing hours. 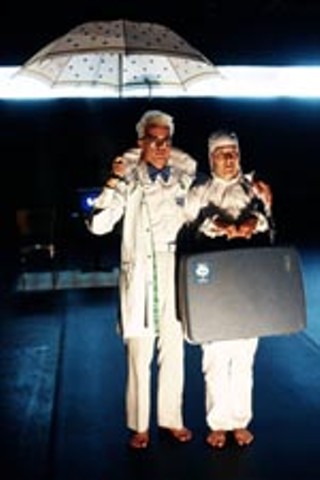 10) The Evidence of Silence Broken (Hyde Park Theatre) Zell Miller III's hip-hop history of his growth from boy to man and man to writer burned with a passion – for family, for words, for life – as pure and hot as the heart of a flame.

Hylas and the Nymphs (UT Department of Theatre & Dance)