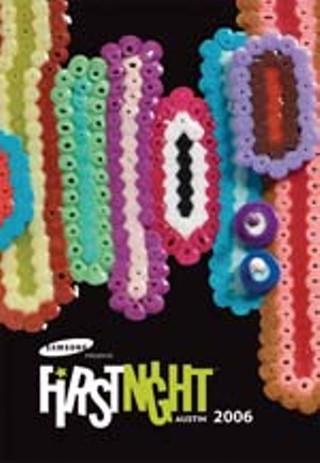 And that ain't the half of it.

Quite literally. Another three dozen bands, dance troupes, visual artists, and performers will be downtown on New Year's Eve doing their thing as part of First Night Austin, a new celebration – well, new to our town, that is – that opts to give locals a culturally intensive (and, not incidentally, alcohol-free) way to celebrate the arrival of the new year. The concept, which originated in Boston, has been in place for almost three decades now, and more than 120 cities, mostly in the U.S. and Canada, have given it a whirl before our town. It would seem to be a natural fit for a creative-class capital like Austin – at least that's been the thinking of arts patron and advocate Anne Elizabeth Wynn, whose idea it was to bring First Night to Austin and who has pursued it with the zeal of one on a holy mission. If it wasn't apparent from the enthusiasm and pride she displayed during the "Night of the First" kick-off party at the Stephen F. Austin Hotel on Dec. 1, it was pretty clear from the roster of high-power corporate sponsors on deck for the event's first go-round: Target, Time Warner, Freescale, HEB, Wells Fargo, and Samsung, which kicked in a cool $100,000 just by itself.

The project attracted more than 360 proposals from artists, of which the final 80 includes such Austin arts luminaries as Sharir+Bustamante Danceworks, Creative Opportunity Orchestra, film artist Luke Savisky, Tapestry Dance Company, Austin Poetry Slam, Sally Jacques' Blue Lapis Light dance company, Vortex Repertory Company, and Indian classical dancer Anuradha Naimpally. Representatives of several groups were on hand at the kick-off party, giving attendees a small taste of what's to come on Dec. 31. Based on that sample, you can expect a wealth of color and spectacle and a pulsating beat to get downtown grooving. Mark your calendars accordingly. The first three hours are designated a family festival, with a Grand Procession down Congress Avenue as the bridge to the evening celebration, starting at 7pm and ending at 12mid with fireworks on Town Lake.