D Berman's exhibition 'Denny McCoy: The Blue Paintings' is just that, but to the patient viewer, the simple vertical bars of blue shimmer to life and transport you distant settings 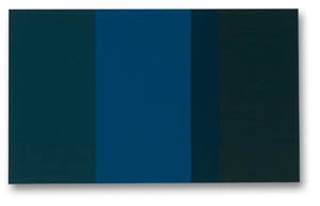 With this latest exhibition by native Texan Denny McCoy, truth in advertising is not an issue. The seven canvases on display are indeed blue ... and little more than blue. Except for one work with a mischievous red stripe along its left side and the occasional foam-green bar sneaking into this frame or that, what you have here are artworks consisting of flatly rendered vertical bars of various widths in assorted shades of blue: azure, cerulean, robin's egg, navy, cobalt, cornflower, sapphire, indigo, and so on. Because the paintings are so straightforward, one might be tempted to dismiss them with a cursory look. But these are works that reward the patient viewer. Turn off that omnipresent ticking clock inside your head, let your eyes go slack, and these fields of blue shimmer to life, with bars surging into the foreground here or receding into the background there, bleeding one into the other, vanishing and then reappearing, the distinct hue of one blue somehow consuming its neighbor or even overwhelming the entire canvas for an instant before retreating innocently back into the confines of its own column.

An old trick, to be sure, long established in the fields of optics and color theory and even exploited in the art world during the poppy heyday of Op Art, but it's one that can still stimulate a visual tingle when you relax into it and let it do its stuff. You feel like you're seeing something magical take place, the movement of a world beneath the world we move through, that secret level of existence where colors have spirits and can shift and jump and interact with one another, like toys that come alive after their young owners have fallen asleep. So what if it's just a hiccup of the brain striving to process the relationship of colors in close proximity? It works like a charm.

McCoy's color of choice yields even more wonders when you allow your mind to loosen as much as your eye. Unfixed in place and time, your thoughts will begin to drift through all the varied associations we make with these shades of blue: the sky colored by season and hour of the day, bodies of water in various parts of the world, the tint of precious gems and metals, perhaps an elderly woman's frosted hair. As it wanders through these connections, your mind may also be categorizing the vertical bars into familiar shapes – poles, windows, doorways – so that out of these abstract fields of blue rise up random little scenes: a slice of summer sky glimpsed between two buildings in shadow, an alley passageway at twilight, channels of water cutting through a field of ice. It's startling and rather fascinating to have these simple columns of flat blue paint suddenly transporting you to such distant yet distinct settings. But it's testament to that staggering variety in the world and how much of it we pick up on even when we're not aware of it, how ten thousand things can be bound up in something as simple as what we call blue.