As the weather cools, Different Stages brings the warmth of rural Ireland to town in its staging of J.M. Synge’s ‘The Playboy of the Western World’ 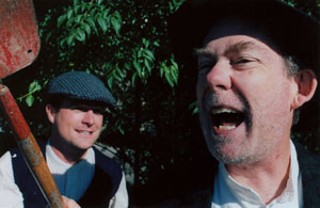 With the mercury slowly tumbling into fall temperatures, it is time to hover over warm bowls of soup, sweet teas, and crackling fires. When you hear a desperate knocking on the door, offer warmth to a stranger left out in the cold. Provide him with food, bed, shelter, and hospitable company. Beware the fluttering young ladies wanting to investigate the curious guest. Keep clear of all tinkers and angry fathers hunting for their misbehaving sons. Drink up the beer, lads and lassies. The Playboy of the Western World has descended upon us during these cool months.

The notorious Playboy provoked riots at its premiere at Dublin's Abbey Theater in 1907. Almost 100 years later, the sources of outrage are difficult to locate. When John Millington Synge wrote the play, Ireland was on a quest for identity in the modernized Western world. The Aran Islands, the play's setting on the farthest western edge of Ireland, had the least contact with the trend of industrialization. Locals during the early 20th century practiced an amalgamation of Catholic and Celtic customs and superstitions. They were peasants, farmers, and herders, not the sophisticated city folk of Dublin. Audiences there witnessed Synge's mimicry of peasant life through colorful dialect and language, sexually flirtatious banter, blatant displays of drunkenness, and subversive commentary on parricide and marriage, and it was too much for them to bear, leading to multiple arrests during the first weeks of the play's run.

During its riotous beginnings, Playboy was a scandalous illustration of Ireland stripped away from traditionally deceiving theatrical depictions. Today, we need not fear such furor; instead, we can enjoy Playboy as a historical relic, a living piece of language and wit, and a cynical observation on the superficiality of custom when heroism confronts a town begging for juicy gossip.