'The Santaland Diaries': Zach's New Home for the Holidays

When it has three popular shows and only two theatres to run them in, what does Zach do? Turn the old bicycle shop next door into Santaland. Here's a conundrum. You're the Zachary Scott Theatre Center, the most popular producing theatre in Austin, and you have two popular shows that you run every yuletide in your two theatres: Rockin' Christmas Party, which Zach Artistic Director Dave Steakley spun off from Beehive, one of the most successful shows in Zach history when he was still managing director in 1993; and The Santaland Diaries, the stage adaptation of David Sedaris' account of working as a Christmas elf at Macy's. This year, however, you've mounted a revival of Shear Madness, a show that, when staged by then Artistic Director Alice Wilson in 1992, became the longest-running play in Austin history, and after four months it's still selling well on the small stage where your perennially popular Santaland goes. What's a theatre to do? 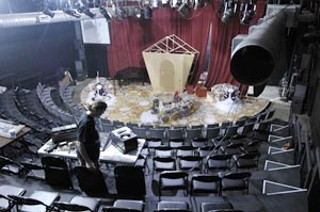 Why, move into the old Bicycle Sport Shop, of course!

"This all really came about just a couple of months ago," says Ann Ciccolella, Zach's longtime managing director. "Christmas is a good Shear Madness time, so we didn't want to close it. But we didn't want to lose Santaland either. The lovely Hill Abell, who had this bike shop for many years, moved it farther south on Lamar a while ago and is doing great business there. But he still had a lease to pay out here through February, and he was generous enough to share it with us."

And what a wonderful gift to share! Right next to Zach's Whisenhunt Arena Stage, the shop is a large, unfinished warehouse with smaller rooms adjoining a spacious main room. On the day I visited, the warehouse was a veritable beehive of activity, with a half-dozen or so workers putting up impressive, amphitheatre-style seating. "Whenever you build a show, you go in knowing that it's going to go away," says Eric Frankhouser, Zach's technical director. "You even build it with that in mind. But for safety purposes, we're building this as if it had to last a hundred years, and it just makes it a little bit harder to let go of. Everyone that's working on it, at least two or three times a day, says, 'We're really going to have to take it down?' They've bought into it big time."

"This year, instead of a boy elf, we have a tall girl elf, played by Lee Eddy," Ciccolella says. "When Lee was told that we were going to do Santaland in the bike shop, she thought, 'Hey, I've worked in a lot of unusual spaces, we'll just do it around the bikes.'" Of course, there won't be any bikes, but there will still be Santa's Workshop and lots and lots of Christmas lights. "And now," says Ciccolella, "you can take the kids to Rockin' Christmas Party or Shear Madness. And if you're a mature 12-year-old gettin' the martinis at home, then I think Santaland is appropriate also."