Intense is an apt word for describing Shakespeare's bloody Macbeth, but intense moments in the UT Department of Theatre & Dance's new revival are few and far between 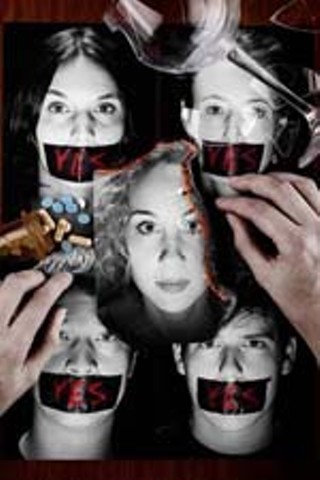 The Coda Theatre Company's House of Yes continues through this weekend.

Here's an interesting story: A man becomes a hero while defending his country and is much beloved by his fellows and his king. He meets some strange women who tell him, among other things, that one day he will be king. He informs his wife of the prophecy, and she insists on forcing the issue, especially when she hears that the king, who is much beloved himself, is going to visit their castle. The man objects; his wife insists; he reluctantly agrees; and one night he murders the good king by stabbing him to death. Then, in order to consolidate his position, he finds he also must kill his best friend, his best friend's son, women, children – all who may accuse or challenge him.

Intense, huh? That's an excellent word to describe Shakespeare's tale of blood, power, guilt, and fear, but intense moments in this UT Department of Theatre & Dance production are few and far between. Director Kenneth Albers stages the play effectively enough. Scene follows scene as blood will have blood, and Albers makes some very intriguing and tension-filled pictures with his actors and with David Utley's simple and appropriate set, which consists of a large mound of scorched earth in the center of the stage, with rows of smaller, similar mounds attached to it and echoing the larger one, backed by a giant wall pierced by a single door. Also of a high quality are Candida Nichols' costumes, things of rough beauty, with more draped wool, leather, and metal than you've probably ever seen on any stage.

With this kind of story and technical support, one would hope the production as a whole would be effective, but it isn't. As a group, the actors deliver almost every line with the same volume, tempo, and rhythm, and the effect is declamatory, monotonous, and spiritless. Barney Hammond is credited as the voice and text coach, and while it's clear that the actors understand the nature of Shakespeare's verse structure, at some point Albers should have stepped in and said, "We've lost the story." Almost never did I believe that Macbeth or his lady felt guilt, remorse, fear, trepidation, or any other human emotion, except perhaps profound detachment. Certainly, not all of the actors get trapped in the verse – Colum Morgan's Macduff and especially Corey Jones' Banquo both manage to have more than a few moments of real humanity – but with an ill-conceived and often irritating sound design, nonsensical alterations to the text, and a few bizarre staging choices, this is a production that doesn't work on multiple levels.

In the middle of the long first act, I tired of watching the repetitive, enervating acting – at a given point, I knew what was coming next, in terms of both the story and the performances – and I wasn't the only one. I looked around and counted no fewer than 10 sleeping patrons, all of whom were nowhere to be seen after intermission – and that was only the two-thirds of the attendees I could observe. Now it may be that they all just had long days, but theatre that interests energizes rather than enervates. It was clear to me that a large number of students were in attendance also, and I found myself despairing. Shakespeare wrote some of the most exciting plays ever penned. If this was their first experience with the Bard live in a theatre, I fear it may also be their last.