Singing you into an English cathedral 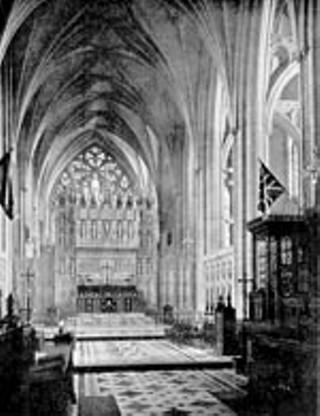 Recently I had the opportunity to direct a play in Temple that centered on modern Baptist Christianity, and while most everyone involved with the production suggested I use saccharine, poppy, modern Christian music to score it, I never wavered. Choirs and organs say God to me, and besides, there really is nothing like driving north on I-35 listening to the Widor Toccata. Fortunately for you, you don't need the excuse of directing a play to listen to organ music or a full choir. You can simply attend the UT Choral Arts Society's concert, Music for English Cathedrals.

"All of the pieces on this program were written by English composers," says Dr. James Morrow, UT director of choral activities and director of the Choral Arts Society. "There's such a rich, fantastic repertoire of English sacred music. The concert begins with a cappella anthems by Tallis, Farrant, and Gibbons, all Renaissance composers, written in a rather transparent and direct style. Anthems are sacred choral compositions that set English texts, generally passages from the Bible or the Anglican Book of Common Prayer, to music. Interspersed are pieces for organ by Tomkins and Tallis, and then the choir will perform Vaughan Williams' Mass in G Minor, which was written in the early part of the 20th century in a neo-Renaissance style."

That's a rather big jump in time, from the Renaissance to the modern. "In the late 1600s, England went into a sort of tailspin," says Dr. Gerre Hancock, who, along with his wife, Judith, will play the organ pieces in the program as well as accompany the choir. "Handel came along, but he was a German who became an English composer, and it wasn't until the late 1800s that enduring English sacred music returned. During that 200-year period, the so-called secular world became more and more prominent and operas took over. The sacred music we hear during that period really was little more than third- or fourth-rate opera music.

"All this changed in the latter part of the 19th century due to a confluence of events: The Roman Catholic Church was allowed to return to England, and R.R. Terry was appointed the director of music at Westminster Cathedral in London. Terry believed the ancient Roman music should be revived to go along with the ancient Roman rite, and this revived interest in sacred music. Famous composers began writing for the church again." This modern Renaissance will be represented in the program with Benjamin Britten's Rejoice in the Lamb, as well as with pieces by Herbert Howells, Gerald Finzi, and William Walton.

"In a very real sense, all music is sacred," says Morrow, "but in this case we have selected music that is sacred in the traditional sense; that is, music that was appropriate to be used in a religious service. Not hymns sung by a congregation but music performed by the choir and organ in the context of a religious liturgy. So it would be appropriate in an Anglican or Catholic cathedral."

Or sung by a 60-voice choir at University Presbyterian Church, just behind the UT Co-op.