In this national tour of 'Movin' Out,' Twyla Tharp's choreographic power gleamed like the chrome of a streamline fin on a convertible 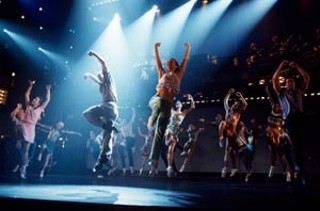 Blasting off with "It's Still Rock and Roll to Me" in Sixties plaid shirts and khakis, the dance cast and band of Movin' Out delighted Billy Joel fans, who bopped along with their favorite tunes. Many of his songs, such as "Uptown Girl and "Just the Way You Are," are etched into people's pop memory, so the audience was warmly predisposed from the start.

In this national tour, Twyla Tharp's choreographic power gleamed like the chrome of a streamline fin on a convertible. With a multiplicity of fast pop dance steps, the moves were peppered by her modern dance signature, odd body tilts, and push-back reverses.

Live sound pulsed from the eightpiece band (with those BJ sax and trumpets) playing high above the stage floor. The show didn't seem to miss the Broadway version's moving platforms that jutted into the dance space on hydraulics. However, this production would have benefited both from clearer diction in lyrics, which hold together the dance story, and a subtle live mix of the music, which occasionally sounded heavy on the trap set.

Tharp's grand design of linking Billy Joel songs to a linear story begins with high school romance, and then friendships are severed by the Vietnam war in "We Didn't Start the Fire." The development of the characters is never convincingly sustained with a few words from a song like "Big Shot" that have to tell a story that lacks credibility and depth of imagination. A full-length dance work with a narrative has succeeded in classical ballet, but these three-minute songs simply don't sustain this plot. They did provide great variety of styles, including ballads like "She's Got a Way."

Movin' Out's strength is the comfort of nostalgia in songs like "Scene From an Italian Restaurant." When it tries to depict the violence of war or the vets' return as addicts, it is much less successful. The most problematic turning point is how the addict turns into a healthy jogger and reunites with his friends. The solution is a prurient visit to the underworld of nightclubs. But the story is not what makes Movin' Out successful, it's the pure dancing.

With spins, twists, turns, and leaps, both the principals and entire company of dancers handled Tharp's athleticism with impressive skill. Her ballet clichés – which were many – did provide some variation in emotional tone, as did Billy Joel's piano compositions that are reminiscent of classical works. What we never see is the true creative originality of the Twyla Tharp who created modern dance pieces like "Push Comes to Shove" or "In the Upper Room." Movin' Out was conceived for Broadway, and the tour provided a pleasant evening. That is what we will remember. 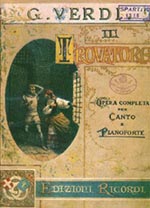 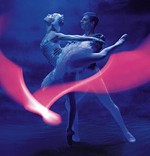 Swan Lake
As Ballet Austin danced through a mist of blue, 'Swan Lake' cast its spell once more