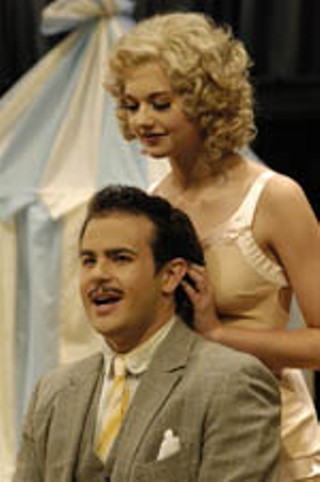 Manny Weisenberg is having one of those days. His movie star client, a British classical thespian who leaped into the saddle of silent-film Westerns and has improbably become a range-riding hero by the name of Bob "Whiplash" McCord, is sick to death of oaters, studios, and California sunshine and is vowing to return to England and the stage, contract be damned. Manny's girlfriend, a would-be starlet from the sticks stuck in lousy background parts, is currently cast as a lobster, which proves to be the straw that breaks the crustacean's back, leaving her determined to head home to Poughkeepsie, with Manny in tow. Two mob goons assigned to collect on the debt that Manny has run up playing the ponies show up to provide him with a little incentive for clearing his tab with their boss – one Joey Bananas by name – by subtracting a digit of his choice from one of his hands. And a shady sheriff with his digits deep in an L.A. real estate scam (and even deeper in hock to the menacing Mr. Bananas) needs convincing that a scheme of Manny's will make the city prefer his land for a lucrative new thoroughfare to the Pacific, getting big bucks in their pockets and the mob boss off their backs. One crisis follows fast on the heels of another, but Manny meets each one head-on with the same six little words: "Let me tell you a story …"

That handy phrase may well be the key to Robert Schenkkan's entertaining new comedy, The Marriage of Miss Hollywood and King Neptune. For starters, it creates the opening through which Manny can momentarily evade disaster, persuading whoever's at odds with him that he has at hand the very thing they want if they'll grant him a bit more time – say, a week – to secure it. It's how our hero keeps these numerous plates spinning just a bit longer while he tries to figure out his next move, and that's much of what keeps us watching a comedy like this: to see how our increasingly desperate protagonist can keep from getting snared in an increasingly tangled web of schemes and deceptions. We've been enjoying this type of farce ever since Plautus spun yarns about wily Roman slaves, but some three-quarters of a century ago, Tinseltown put a special spin on the form, a uniquely American zaniness that came to be called screwball. That's what Schenkkan is channeling here, the Hollywood hijinks of Bringing Up Baby and His Girl Friday, with their odd-couple romances, adorable madcaps and quipping cynics, and send-ups of American dreams. He loves those stories, and when his Manny sets his silver tongue wagging with that trademark phrase, he's giving his audience what they want to hear. He's churning out dreams just like the studios.

The UT Department of Theatre and Dance is the first artistic entity anywhere to take a crack at Schenkkan's new/old comedy and has lavished on it a sumptuous look that recalls the Tinseltown spectacle of bygone days in all its glitzy, showy style. This is nowhere more true than in Esther Marquis' costumes, which number in the dozens upon dozens but always show a smart sense of period fashion and frequently a witty playfulness, as with "Whiplash" McCord's candy-colored cowboy duds or the mermaid drag in which the mob goons end up attired. The performances show a similar sense of the era and of playfulness. Considering that most of the show's student actors weren't born until 40 years after the golden age of screwball comedy ended, the genre should be as remote to them as Restoration comedy – and probably about as tough to play, and yet almost to a person, the 30-plus collegians capture the peculiar patter and outsized comic personalities of Depression-era screwball. You can hear it in the jaded snarl of Barrett Nash's "minister's daughter," an actress whose onscreen piety belies the wildness and behavior of an alley cat. And in the labored talk of Joseph Cheatham's malaprop-prone thug who's trying to better himself by increasing his vocabulary. And in the brass-tacks vivacity of Rose Mitchell's voluptuous mob moll, Lola Gotalotta. And you can certainly hear it in the fast-talkin,' fancy-steppin' stories of Michael Yager's Manny Weisenberg, who adroitly balances between panic and invention, charm and desperation. (The production's somewhat older guest artists Frank Delvy, Craig Kanne, and Rick Roemer neatly nail the style as well, with Roemer's hambone Shakespearean in chaps seeming to have stepped right out of The Royal Family.)

What you also hear in the construction of the lines, in the tart, slangy banter, is that this script yearns for the pace of a thoroughbred on that track at Santa Anita that we hear about so much here. And alas, for the most part, the production moves more at a trot than a gallop. But what director Lucien Douglas may have sacrificed in tempo, he's made up for in a clarity of character and style. When the lights come up, we ease back into that world of long ago, of flamboyant silver-screen stars and the silver-tongued agents who serve them and the ingenues who love those agents, of cuddly gangsters and their no-nonsense mistresses, of unlikely romances and mistaken identities and outrageous coincidences and glamour and slapstick and happy endings. It's a story. It's a dream. It's fun.