Throughout November, Austinites have the chance to see four plays that have stood the test of time: 'Hamlet,' 'Macbeth,' 'The Way of the World,' and 'The Playboy of the Western World' 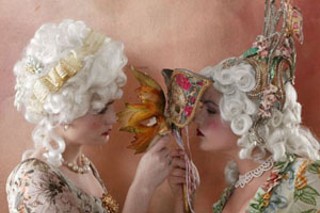 The Way of the World at St. Edward's University

A friend of mine once told me that a hundred years from now children will be amazed when their parents tell them tales of how we humans used to have thousands upon thousands of portable containers that would not leak or break. My friend was referring to plastic bottles. While every culture has cast things aside, contemporary culture sometimes seems absurdly wasteful. But some things will always endure, no matter how disposable the world becomes. One of those things is the art of storytelling.

This coming weekend, and for a few weeks after, Austinites will have the chance to see four plays that have stood the test of time. No play has stood that test more effectively than Hamlet, which will be staged by the Austin Shakespeare Festival. "Aside from the universality of human emotion, the story of Hamlet is compelling in itself," says Guy Roberts, ASF's artistic director, who is directing and starring as Shakespeare's melancholy Dane. "Who can resist a play with eight violent deaths, a ghost, adultery, incest, a madwoman, and a fight in a grave? But the ambiguity of Hamlet's heroic nature is what really keeps him so fascinating. No hero – or villain – in history has embodied such a complexity of thought and emotion."

"For centuries the way of dealing with issues that matter, with ideas that count in our lives, has been primarily through the stage," says Dr. Brooks Barr, dramaturg at St. Edward's University, where William Congreve's well-known Restoration comedy The Way of the World is being produced. "Novels are a late invention, the essay did not come into its own until later times, and books were expensive and rare. If you wanted to engage people where the water hits the wheel, you put it on the stage."

"The classics are like mirrors," says Norman Blumensaadt, longtime artistic director of Different Stages, which is producing John Millington Synge's The Playboy of the Western World. "As we age they change with the times. When we return to them, they usually say something different depending on where the audience and artists are coming from. If the play is a classic, the themes are timeless."

Beyond seminal thought and timeless ideas, there are more practical reasons for producing the classics. The UT Department of Theatre and Dance is producing Shakespeare's Macbeth, but not necessarily because it is a great and enduring play. "All of our Master of Fine Arts degree actors are in their second year of study," says K.C. Scharnberg, UT development assistant. "Their third semester is when they're studying Shakespeare very intently, and the acting faculty chose Macbeth specifically because they looked at the actors they had and decided based on their character types that they had the right people to do the show."

"Whatever the culture, whatever the conventions by which the stage operates, in the theatre ideas are flesh and blood in action," says Barr. "Since men have had tongues to speak, and possibly even before, when ideas or concepts were important, they told a story – they put it in human form. The great dramas endure, and we return to them, because, when all is said and done, 'The play is the Word becoming flesh.' And there we meet ourselves."