Actors From the London Stage: Just the Essentials

With Actors From the London Stage in residence at UT, you can see five actors reduce theatre to its essential elements: actors, audience, story 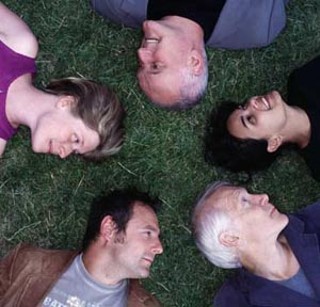 At the risk of dating myself, back in the mid-1980s, when I was an undergraduate student at the University of Maine, I saw Actors From the London Stage present Shakespeare's The Merchant of Venice with five actors, a dagger, a piece of parchment, and a mandolin. At least that's how I recall it. They must have used a stool or two, but what I remember most is theatre reduced to its essential elements: actors, audience, story. Seeing so few performers carry the weight of a Shakespeare play so lightly, so easily, so simply, was a transforming experience.

This week, for three performances only, you can have the same experience. AFTLS are in residence at UT, where they're performing another of Shakespeare's brilliant comedies, Twelfth Night. "The program first came to UT in 1979, then 1983, and then 1999, and it's been here every year since," says Dr. Alan Friedman, professor of English and the coordinator of the residency. "Patrick Stewart was one of the original founders of the program, and he actually came in 1979. AFTLS presently is coordinated in the States through the University of Notre Dame, but back then Patrick was one of the people at the British end along with Trevor Nunn, the Royal Shakespeare Company director. When I started the Oxford Department at UT in 1984, Patrick came and worked with our students for the first four years."

In addition to performing Twelfth Night, the actors are participating in UT classes and occasionally doing one-person shows. "It's an incredibly time-consuming job," says Matt Radford, once an actor with AFTLS and now one of their associate directors and, surprisingly, a UT English Department graduate student. "Teaching is the thing that the actors are most terrified of. It might not be Shakespeare or even plays. It might be Chaucer or Dickens or the school of economics – that was a curious one. We teach from an acting viewpoint. Anything can benefit from being gotten on its feet and spoken aloud. Anything.

"We cast the shows and rehearse them, but there's no director. Directors tend to impose their vision on a text, and here it's all about the text. And the actors always produce these incredibly inventive shows. In Twelfth Night, we have a woman who plays a man in disguise and also plays her own brother – in the same scene!"

A woman who plays a man in disguise and also plays her own brother in the same scene? How could anyone ask for more?

Actors From the London Stage present Twelfth Night Thursday-Friday, Sept. 29-30, 7:30pm, at the B. Iden Payne Theatre, 23rd and San Jacinto, UT campus, and Oct. 1, Saturday. 7pm, in the Theatre Barn of the Winedale Historical Center, Winedale, Texas. For tickets to the Payne performances, call 477-6060 or visit www.texasboxoffice.com. For tickets to the Winedale performance, call 979/278-3530. For more information, visit www.utexas.edu/cola/depts/english/
actors_from_the_london_stage/ .