In the city's back yards, Leticia Rodriguez and Tim Mateer are turning strangers into neighbors through evenings full of home entertainment 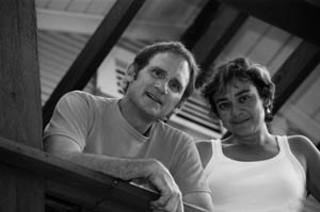 When I pulled onto West Ninth in the old Clarksville neighborhood, where the houses are packed together and parking is somewhat constrained, the location of the event I'd come for was obvious without having to look at the house numbers. Smiling people were walking up to a lady at a table in one of the yards. I went into the back yard, where popcorn was popping and people were mingling, and was greeted almost immediately by Leticia Rodriguez, who, along with Tim Mateer, is the guiding force behind this – hmm, what to call it? – home entertainment. Yes, that's exactly right. Rodriguez introduced me to another gentleman, who had brought his children with him, and what began as a conversation, instigated by Rodriguez, about how we entertained ourselves as children ended as a conversation about Austin and the changes wrought across the area over the last 20 years. Shortly before the show began, I took a seat beside a man who introduced himself as Jerry. He offered me a beer, and I accepted, with thanks.

The show wasn't really a show. Certainly, there are numerous stories, most told easily and with great humor by Mateer, and there are numerous songs, most sung pleasantly and lovingly by Rodriguez. In every instance, the focus is on family, fun, and gentle, loving interaction. But at almost no point did I feel I was watching a "show." It was a gathering.

"Jim Fritzler used to say, 'During the summer we're only doing theatre light. No heavy shows,'" says Mateer, a member of Fritzler's Big State Productions in the Eighties and Nineties. "Between Leticia and I, we came up with the idea of putting shows in people's back yards. We wanted to engage our audience on a very personal level. Each weekend we move to a different yard, doing two shows in each yard. We're limited in the number of people who can come and see it. That's why there are no addresses in our press."

"It's about inclusion," says Rodriguez, a longtime Austin dancer and choreographer. "It's about knowing who your neighbors are and how we can promote that."

At one point as he told a story, Mateer asked me to hold his glasses. As he told another story, he passed out a picture of himself and his family posed before a curtain with their musical instruments. Jerry offered me another beer. I accepted. As Rodriguez sang a song, the moon rose over the roof of a house behind her. At the end, we blew bubbles as another song was sung, then we were invited into the house for queso and chips.

As the four remaining offerings occur in two different locations, one in the Southside 45 area and one in the Zilker area, your experience may differ from mine. But I would be surprised if it was not exceedingly similar and just as welcoming and warm.