Zach's spirited revival of 'Shear Madness,' that audience-interactive murder mystery-comedy, just might be the kind of confection your dayjob-wearied mind could use 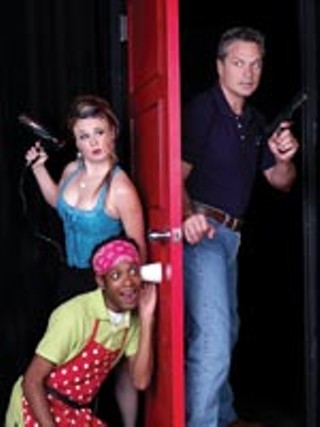 If you're looking for it, Zachary Scott Theatre Center has it on bright display in this Paul Portner piece. It's a comedic, audience-interactive murder mystery, a sort of dinner-theatre staple unsuppered and performed all over the Whisenhunt Arena Stage.

Confection. A candy store boasting rows of glass jars stocked with sugary canes of peppermint, green apple, horehound, and the like? No: a beauty salon – unisex, as they used to say – loaded with hair driers and mousse and (of course) shears, run by a snap-happy gay stereotype and bustling with other stock characters (a hoochie blonde, a shady-dealing heavy, a philandering lady-who-drinks/lunches, a pair of undercover cops).Ê

In the course of the show, a character (offstage, only alluded to) is killed. But whodunit? That's what the audience, after watching the hammy shenanigans enlivening the stage, has to decide. That's right: After questioning all the suspects and hearing their seemingly off-the-cuff alibis and rationalizations, the audience votes on who the killer is. And so the play plays out every night, with a different ending forced by the audience's choice.

Yes, this is fun.

Marilyn Abrams and Bruce Jordan have adapted Portner's sprightly script into an adventure set squarely – or, perhaps, somewhat hiply – in Austin. Allusions to local politics and culture and geography abound, sharing talkspace with references to the latest national celebrity-based gimcrackery. The local references are well done and appreciated and add a certain oomph to the goofy proceedings; the pop culture stuff, meh, not so much: Why redo the cheap LCD japery that Mad magazine and every lame sitcom already does so much better?

The performers charged with transporting all this into your sense of humor, though, these guys are good – sometimes struggling with the thinness of the material, sometimes overcoming the hindrances of complex plot machinations, often making the roles come to better, more enjoyable life than the characters deserve. The two standouts are the charming and effervescent Espie Randolph, portraying the salon's proprietor, and the studly-yet-affable Jamie Goodwin, manfully embodying the APD detective who runs the show. Tish Brandt, Zach Freeman, David Jarrott, and Larissa Walcott also do some sturdy work but don't have quite the chance to shine that's afforded to the hairdresser and the cop.

Alice Wilson directed this for Zach, but with each actor having, in the play's latter half, to operate from a sort of scripted decision-tree that branches crazily according to the audience's input … well, how responsible could she be for the slightly staggered pacing? Only the section right before the murder takes place, with characters moving singly in obvious evidence-setting patterns across the minimal set, could really be helped by a tighter directorial rein, a better plan of blocking and timing.

If you like such shows, and you like them with a local flavor and some spirited presentation, and not to mention lighting by the talented and ubiquitous Jason Amato, then here's your horehound, here's your peppermint, here's your sour apple. Here's a sweet dessert which can never take the place of a meal, but which just might be the kind of after-dinner treat your dayjob-wearied mind could use.