Oct. 31 is the target date for completion of the deconstruction of Palmer Auditorium and the deadline for the Long Center to match a $2.5 million challenge grant from Debbie and Kevin Rollins 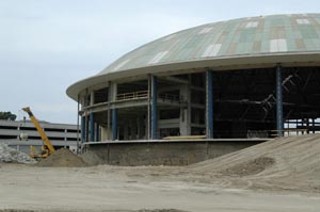 For anyone with lingering doubts that the Long Center for the Performing Arts would ever be realized, here's an image that should dispel them. All through the broiling summer, workers have been ridding the 40-year-old Palmer Auditorium of asbestos and breaking it down panel by green panel to prepare for the eventual construction of the Long Center on the site. And as is clear from the facility's now denuded condition, they're moving with all deliberate speed. In fact, Long Center Executive Director Cliff Redd reports that deconstruction of Palmer is on time and on budget – a couple of modern miracles in this kind of project. If that continues to hold true, this phase of the project should be completed around the end of October, at which point actual construction could begin.

Meeting an Oct. 31 target date would make what Redd deems "a harmonic convergence" for the center, given that All Hallows' Eve is also the deadline for the center to match a $2.5 million challenge grant from Debbie and Kevin Rollins. Announced last week, the grant from the couple – who have already given $5 million to fund a 240-seat studio theatre in the center – is intended to get money flowing into the center's capital campaign more quickly. And it sure seems to be working. Another Long Center patron, James Armstrong, has since pledged $500,000 on top of an earlier gift of $1 million, and approximately $85,000 more in donations are in the pot. That leaves $1,915,000 – a pittance compared to the $77 million goal – but only 81Ú2 weeks to raise it. No one is more aware of that ticking clock, of course, than Redd, who's hustling to raise the cash even faster than his $500,000-a-month usual, and he notes that 10 to 12 more prospective gifts are already in the works. If – let's make that when – the center matches the Rollins' grant, it'll be just a half-million shy of the $67 million it has projected for construction. (A $10 million endowment to support operating expenses will still need to be raised after that.) So, if you've been waiting to see some movement down there at South First and Riverside before you threw your support behind the Long Center, be apprised: The movement is happening. And no time is being wasted. (Or anything else, apparently: Some 80% of the 37 million lbs. of material coming out of the old Palmer is being recycled.) Contributions can be made online. For more information, call 482-0800 or visit www.thelongcenter.org.