Austin's three entries in this year's New York International Fringe Festival earned some real attention, ranging from the respectable to the rave 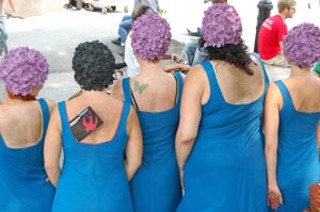 Despite the fact that this year's New York International Fringe Festival included more than 200 shows, Austin's three entries not only weren't lost in the crowd, they earned some real attention, ranging from the respectable to the rave.

Across the Hudson in Jersey, Robert Johnson of The Star-Ledger wrote: "The company makes this gruesome story palatable by loading their production with small ironies and references to pop culture. Do not be deceived. While the female cast appears seductive in a mock water ballet, they make it clear that violence against women comes with a terrible price."

The closest Philomel got to a dissenting opinion came from Charles Battersby on NYTheatre.com: "I've never been a fan of the avant-garde, and I usually see nude emperors where other people see clothes spun from gold, but even I could see the professionalism and dedication at work in this production."

HIT., from a chick and a dude productions, proved to be just that, winning a Fringe NYC 2005 Overall Excellence Award, for Outstanding Ensemble. It also won praise from Alyssa Simon on NYTheatre.com. "Director Melissa Livingston has done a fine job of creating tight and crisp scenes, and the dialogue crackles. The three actors fully inhabit their characters and fill every moment. The ending is a surprise that you don't see coming, and the acting, especially Ken Bradley and Joel Citty as Ervin and Wyatt, make this show more than worth your while to attend."

On his personal Web site, New York Times freelancer Hy Bender had this to say about the show: "The writing, by costar Shanon Weaver (who plays young Asher), is smart and tight; the dialogue in several scenes is so much fun that it garners applause. The acting – by Weaver, Ken Bradley, and Joel Citty – is also fine, with Citty a standout. But what's even more of a pleasure is how seamlessly the three actors interact with each other. Kudos also goes to director Melissa Livingston, who creates a great deal of suspense with a very spare set."

Finally, Steve Barney was all alone in the big city (doing his FronteraFest favorite "Wade"), but that didn't keep him from being discovered and lauded on NYTheatre.com. David Reinwald wrote: "In 'Wade,' director, writer, and performer Steve Barney has written a one-man play that is funny and intellectual, heart-warming and incredibly perceptive."

At TheaterMania.com, Dan Bacalzo wrote: "Written, performed, and directed by Steve Barney, 'Wade' invites the audience to spend an evening with the title character as he does his laundry and reflects upon his life. It's a far more enjoyable, insightful, and poignant experience than you might expect." Production / Performance, Artist