Can I get a suggestion for an Austin festival in which troupes from across the country gather to create instant comedy?

Our fair city is once more in the grip of the fever. 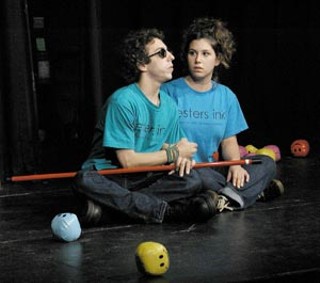 No, not cedar fever, although this condition can seize one just as suddenly and be every bit as all-consuming. But rather than dragging one down with congested nasal passages and energy-sapping fatigue, this fever inspires animated activity, typically seeking out a stage, asking anyone within earshot for suggestions (a location, an occupation, an embarrassing personal habit, and such), and then using them to create some instant theatre – maybe a character sketch, maybe a scene, maybe an entire comic musical. 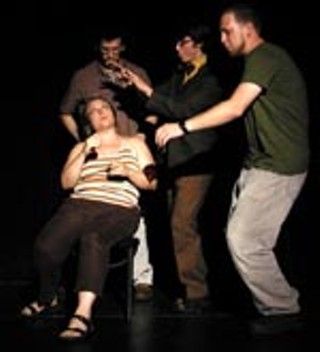 Improv has been a steady part of the local comedy scene for at least two full decades now, with a handful of troupes making merry on the fly at any given time. But every five years or so, that chronic low-grade infection will flare up into something seriously contagious, affecting dozens and dozens of performers and scores upon scores of audience members. You may recall the last dramatic outbreak in the late Nineties, when the dearly departed improv/sketch troupe Monks' Night Out launched the Big Stinkin' International Improv & Sketch Comedy Festival. This was the humor-biz equivalent of the flu pandemic of 1918, at its height showcasing more than 50 comedy companies from across the land and featuring special guests on the order of Fred Willard, Stephen Root, Wayne Brady, Saturday Night Live's Chris Kattan and Ana Gasteyer, and MAD TV's Alex Borstein, Will Sasso, Michael McDonald, Mo Collins, Phil LaMarr, and Nicole Sullivan. BS flamed out spectacularly with its fourth outing in 1999 and, despite the advent of venues such as the Hideout and the now-defunct Bad Dog Comedy Theater and companies such as Well Hung Jury and the Heroes of Comedy, in the years following the fever broke.

But something has changed. Call it a shift in the winds, call it the upswing in a natural cycle, call it what you want, but the symptoms are there. When a city can claim upwards of 15 comedy troupes, when their weekly shows are routinely packed, when they start organizing into a co-op, for Shecky's sake, then it's safe to say the fever is spiking again.

And when the modest little improv festival that's been showing off a dozen or so troupes doubles in size all but overnight, that's just further proof that the heat is on. The Out of Bounds Improv Festival and Miniature Golf Tournament was launched in 2002 by Well Hung Jury's Jeremy Lamb, who managed to bring to town a handful of troupes from around the state in the first two years. He left Austin for the Windy City in 2003, but the OOB continued under the leadership of Shannon McCormick and Mike D'Alonzo, who have been not merely keeping the flame alive but fanning it. This year, the festival's fourth, finds a full 28 troupes taking part, including solo acts, duos, and groups from Houston, Dallas, Phoenix, Los Angeles, Portland, Salt Lake City, Chicago, Richmond, and New York City. But fully half of those troupes will be homegrown, showing just how the local scene is thriving now. (Of course, a look at the lineup shows an interesting amount of crossover among the current troupes. See "Can't Tell the Players Without a Scorecard.")

What's exciting about these flare-ups of improv fever is the concentrated bursts of creativity they release, the spontaneous, unpredictable, sometimes even unconscious expressions of the human mind pulling emotion, character, narrative, and, yes, pratfalls and punch lines out of thin air. It's a singularly wondrous – albeit at times nerve-racking – act of creation to witness, or, really, to be a part of, since the audience is allowed to be a co-conspirator, to literally breathe life into these scenes in speaking those all-important suggestions. The results may not always set a new standard for theatre, but at their best they can amaze like nothing else. Andy Crouch, a longtime improviser and founder of the new Austin Improv Co-op, says that at the Out of Bounds Festival, "I always see at least one or two troupes that blow my mind a little bit."

He offers that "the coolest show I've seen in Out of Bounds was the Kihckercast Project, a solo show by Topping Haggerty, possibly one of the nicest improvisers I've ever met. She did a seamless one-man longform with a strong narrative that was riveting and delightful in every moment. And Mod 27 was possibly the most fearlessly fun and playful troupe I've ever seen. They threw a lot of stuff I really care about out the window, but did it so gleefully that I didn't mind. And, of course, Well Hung Jury and Jeremy Lamb are always a pleasure to watch." (Lamb is returning to town with his Bearded Lamb solo improv act, but he and other members of WHJ, which disbanded two years ago, are also reuniting for a special performance at the festival.)

And when all these improvisers get too feverish, well, there's the miniature golf ... which connects how exactly? "The golf is the product of Jeremy Lamb not wanting to do the standard workshops that are part and parcel of most improv fests," Crouch explains. "Instead of a few people taking classes that might or might not be useful, we should all be hanging out having fun. And what's more fun than minigolf?

"The whole golf thing is pretty nuts," he adds. "In true improv fashion, extra points (or points off, since it's golf) are awarded for risk and stylish execution. Last year my team wrapped up the course using me as a putter for the final shot, which we sank and claimed victory. The victors are awarded the 'ridiculous jacket' and the privilege to wear it the rest of Saturday, including the festival party. It's then harshly ripped away from them and stored in a climate-controlled closet until the next Out of Bounds."