At the Blue Theatre, you can see an outstanding example of commedia dell-arte in Tongue and Groove Theatre's awesomely entertaining production of 'The Three Cuckolds' 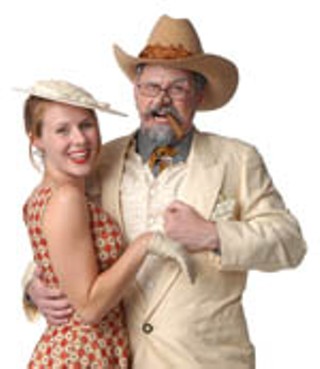 Commedia dell'arte. Loosely translated: the art of comedy. A theatrical form popular in 16th-century Italy centering on stories of love and intrigue, with stock characters like the young lovers, the rich old man, and the comic servant, and improvised moments of off-the-cuff mayhem, known as lazzi, tossed in to further spice the loud, broad, energetic mix.

Ah! Zanni! Blake Smith is a young man, but here, with head shaved completely bald, a long tuft of white beard clinging precariously to the tip of his chin, body bent and angular, cane leading the way, Smith's Zanni embodies age and lust so thoroughly that you really will feel his pain and his, umm, passion. And I haven't even mentioned the astounding noses or the delightful dancing or the amusing props or the dozen or so different costumes that Elizabeth Doss' Flaminia wears, one for each new entrance.

How did this so often impressive production happen? Given the virtually complete marriage of visual and aural expression and the performances that appear to have been cut from illustrations and pasted onto the stage, I can only bow to director Yeakle and say, "Bravo! Bravissimo!" At times it's too slow, at times too soft, at times too loud, but it's always of a piece, always like viewing the past through the lens of the present, and always highly and, dare I say it, awesomely entertaining.

Commedia dell'arte. Loosely translated, the art of comedy – and "art" is a word I try not to use liberally. If you've ever wanted to do a little time traveling (and who hasn't?), then you need travel no farther than the Blue Theatre in Austin, Texas, to see an outstanding example of an ancient art form approaching its most sublime expression.