'The Will Rogers Follies': Back in the Saddle Again

For the creative team on the new national tour of 'The Will Rogers Follies,' working on the show is like slipping into a broken-in pair of old boots 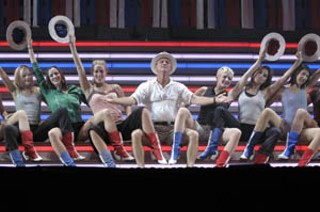 You know how it feels to slip into a broken-in pair of old boots? The ease, the comfort, the just plain rightness of it? Well, that's the way it is for much of the creative team on the new production of The Will Rogers Follies, launching its national tour at Bass Concert Hall this weekend. Director and choreographer Steven Minning was Tommy Tune's choreographic associate on the original Broadway production, and Assistant Choreographer Eileen Grace was one of the Ziegfeld girls and the show's dance captain for 21Ú2 years of that Broadway run. Since then, both have directed and choreographed the show for subsequent productions or tours. And of course, Larry Gatlin starred in the show on the Great White Way once Keith Carradine and Mac Davis had their turns in the role, after which he headlined a 1993 national tour and a revival tour three years ago. All three are sliding back into a show that they not only know well but that, in the words of Gatlin, "feels good," that's "very natural, comfortable, and still moves me every night." "The show has so much heart to it," says Minning, describing the Follies' enduring appeal.

As if having artistic leaders who know the show so intimately didn't ease the challenge of mounting this production, having the UT Performing Arts Center provide rehearsal facilities made the job easier still. With the PAC in the dog-days doldrums, the company had no competition for the center's resources: the rehearsal rooms, the technical support, even the big Bass stage itself. Add to that the technical expertise and generosity of the PAC staff – which won praise from every corner – and what could have been a grueling three-week run up to a yearlong tour was actually "a pleasant experience," says Minning.

That was no surprise to Gatlin, who'd spent June in the PAC developing his new musical about Quanah Parker, son of kidnapped settler Cynthia Ann Parker and Comanche Chief Peta Nocona and the last chief of the Comanche Nation. Gatlin was mightily impressed by the facilities and how much everyone invested in the project. He credits them with helping create what one moved audience member called "a real play, a real musical" from the ground up in 141Ú2 days. The conversation sparks a real hometown pride in the stage star and singer, who projects a genuine admiration for the locals. He just wants to make sure that the audiences deliver the way the artists do. "Austin, don't let me down!" he calls out. "Show up!"