In 'Aztlan Underground,' Aztlan Dance Company again shatters Latin dance stereotypes, twirling the pieces and making a mosaic of its own contemporary style 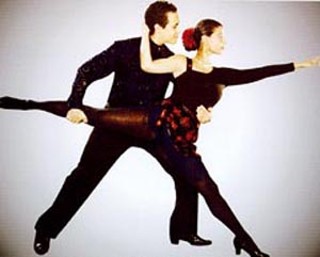 Viva La Lucha Libre! In this corner of the stage, the male-female duo extraordinaire wearing white tights, satin calzoncillos, and gaudy patent-leather wrestling masks sway like matchsticks in totally intentional choreographed dances and pounce on their counterparts (or at least pretend to). Are you ready to rumble?

Hang on. This is the Aztlan Dance Company? There's no samba or rumba in this show, but after more than 30 years Aztlan can boast that it performs every show uniquely; like the wrestlers' masks, no two are alike. Aztlan has led us along a path with indigenous stories of Latin America, from mythical legends to inner-city sagas.

Artistic Director Roén Salinas says there's no "zapateado" in the troupe's latest show, Aztlan Underground. He's not referring to the burlesque boot-shifting but the footwork. It's the rhythmic heel pounding that gives rise to the typical flamenco dance you see in danza folklórica, where women look like flowers, wearing braids, embroidered blouses, and fluttering ruffled skirts. That might mean nothing to you if you don't know how Aztlan shatters Latin dance stereotypes on the dance floor, twirling around the pieces and making a mosaic of its own contemporary style.

In "Enter Our World," dancers repeat angular movements of Native American daily life such as making corn or protecting soil. Wearing jeans, the dancers make you think that if Aztecs lived today, this is how they would dance. The young dancers are muy sexy, especially when hip-hop swaggers into the next cuadro.

Proud ethnic anthems of misspent immigrant youth by Frost (formerly Kid Frost, the godfather of Latin hip-hop), Immortal Technique, and Kinto Sol, after which the cuadro "El Quinto Sol" is named, are played. The lyrics are brutal to the ear and indecent, but also poetry to both the injustice and harmony of the barrio, which Salinas has choreographed fervently.

Driana Gonzales' dresses in this scene look like a tiburón bit off the bottom, accenting Latina curves. But the dresses don't do anything without the four women gyrating sexily in them with the uniformed men in cargo.

The charcoalesque mural background presents the corner of Chicon and East Seventh of a parallel mundo, a ghetto where a club sits next to a wrestling ring and a bench for la prensa (the press) is vandalized with graffiti about raza. A subtext of suppression, they slyly pass copies of Ahora Si! to each other. It's clear that this barrio is not a violent one but one of kinship and community, a comment Salinas often makes through Aztlan Dance.

But that's just the beginning. We're then thrust into the ring with Daniel Paredes, Stephanie Mayorga Keeton, Holly Wissman, and Fabian Martinez as they interpret with dance the Lucha Libre, only to have Salinas lead them quickly into some jubilant classroom salsa. It's in this second act, when the performers are excited, that they use their full expressions, enticing the audience with everything they have. Despite the fact that some of the dancers are new, all of them are unmistakably professional, not missing a beat.