August has seen at least three murals added to the city's burgeoning collection: at Mathews Elementary, St. David's Hospital, and a new Starbucks 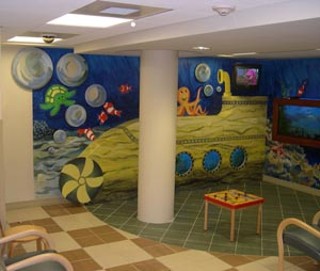 What is it about the dog days that gets Austinites all hot to make murals? This reporter isn't sure, but he does know that August has seen at least three murals added to the city's burgeoning collection. Here's the rundown:

• The city's newest Starbucks boasts some local flavor with the 8-foot-by-12-foot mural Austin Bound, painted by Karen Maness, resident scenic artist for the UT Performing Arts Center. The mural, which depicts familiar sights of the city, including the UT Tower, the Texas State Capitol, bats emerging from the Congress Avenue Bridge, a yellow-jerseyed Lance biking past, and local music, may be found in the expanded and remodeled lobby of the Radisson Hotel Austin, at Congress and Cesar Chavez. "I've been wanting to do a permanent work in Austin because I'm eager to give back to the city," says Maness.

• Students returning to Mathews Elementary in Clarksville this week were greeted by a new 19-foot-by-31Ú2-foot mosaic mural on the outside wall in front of the school. In the spring, local artists Brad and Debbie Kizer of the Backyard Studio worked alongside art teacher Sarah Belknap to create handmade tiles with 450 students and more than 20 members of the community. The project was funded with $1,500 raised by the PTA through the production of cards created by the children. The artists and kids installed the tiles during the first week of August.

• Kids who have to spend time waiting in the emergency room of St. David's Hospital now have a mural to make their time there a little more fun. When the space was being renovated recently, St. David's staffers suggested to architects Graeber, Simmons, and Cowan that part of it be designed especially for kids. To that end, they created a space with toys, child-size furniture, a television, and an undersea mural by Carol Hawkins. The scene offers an octopus' garden, complete with yellow submarine with live fish swimming behind the porthole glass.