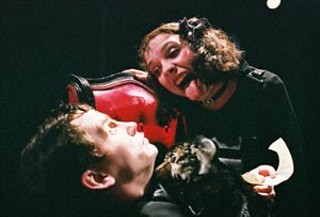 Drama with a Gothic flair scored high with the theatre buffs making this year's nominations for the Austin Circle of Theatres' annual B. Iden Payne Awards. As announced by ACoT on Monday, Aug. 15, the most favored productions were The Death of a Cat, Salvage Vanguard Theater's world premiere of the C. Denby Swanson darkly comic drama in which an Addams-esque family is beset by plague and a sinister doctor, and the Austin Playhouse production of The Mystery of Edwin Drood, Rupert Holmes' music-hall spin on the unfinished final novel of Charles Dickens. Cat rated 10 nominations, including Outstanding Drama and Outstanding Original Script, while Drood scored eight, including Outstanding Production of Music Theater and nominations for the performances of Rick Roemer, Jill Blackwood, Jacqui Cross, and Michael Stuart.

The nominations, covering work mounted from August 2004 through July 2005, recognized 58 productions by 30 area performing arts companies. The Zachary Scott Theatre Center's staging of Crowns was recognized seven times (for Outstanding Production of Music Theater, Dave Steakley's direction, Allen Robertson's musical direction, Jason Amato's lighting design, and the performances of Jacqui Cross, Tim Curry, and Janis Stinson). Garnering six nods each were Zach's version of the 9/11 drama Omnium-Gatherum (nominated for Outstanding Drama, Steakley's direction, Amato's lighting, Robertson's sound, and the performances of Janelle Buchanan and Helen Merino) and the Austin Shakespeare Festival's latest take on A Midsummer Night's Dream (nominated for Outstanding Comedy and the work of directors Guy Roberts and Ian Manners, costume designer Buffy Manners, sound designer Phillip Montoya, and actors Corey Gagne and Jill Blackwood). Scoring five nods each were: Austin Playhouse's Enchanted April, ASF's The Dog in the Manger, Bismeaux Productions' A Ride With Bob, and Physical Plant Theater's Not Clown. Companies leading in honors were Zach with 23 nominations, Austin Playhouse with 17, and SVT with 15. For a full list of nominees, see the sidebar below. Nominations will be voted on by ACoT members and tabulated by the accounting firm of KPMG LLP, which keeps results secret until the night of the awards, which this year will be Monday, Sept. 26 (venue to be announced). For information, call 454-TIXS.