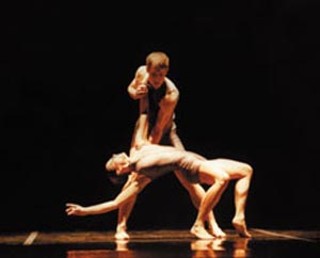 The last several seasons have seen Stephen Mills and Ballet Austin really getting around: performances at the Kennedy Center in Washington, D.C. and at cultural festivals in Europe, choreographic competitions in Montreal and Chicago. Well, with their reputation for excellence growing by leaps and bounds, you knew their travels eventually had to bring them to the City That Never Sleeps – and so it has. This fall, the company performs at the Joyce Theater in New York City, the metropolis' "home for dance."

No sooner does the company finish its season opener, "Carmina Burana," Sept. 30-Oct. 2, than it's off to New York for a five-night stint at the 472-seat Joyce. The Oct. 5-9 run will feature two of the dances that Ballet Austin presented on its summer jaunt to Slovenia and Italy ("Dance Ambassadors," Arts, July 15): Mills' "One/The Body's Grace," the second act of his 2003 ballet Touch, which won the Festival des Arts de Saint-Sauveur International Choreographic Competition in Montreal last summer; and "Ashes," the dance which earned Mills the only American spot at the 1998 Rencontres Choreographiques Internationales in Paris. But Mills will also treat his New York audiences to a world premiere: "Desire and Three Movements," a work performed en pointe to music by Arvo Pärt and Steve Reich. (Local balletomanes wanting to see the work will have to wait until spring, when it will be presented as part of Director's Choice/Evolution, March 31-April 2, 2006, at Bass Concert Hall.)

The schedule for the Joyce reads like a who's who of great contemporary dance companies from across the nation and the globe, so you can see why BA Artistic Director Mills and Executive Director Cookie Ruiz consider their invitation to perform there such an honor. "The Joyce is considered one of the most prestigious touring destinations in dance," says Ruiz, which makes the ballet's selection "an enormous affirmation of Stephen's national and international profile as a choreographer."

Speaking of talented, award-winning Ballet Austin choreographers, the company's Gina Patterson just added another laurel to her rapidly growing list of honors: She's one of two winners of this year's National Choreographic Competition of Hubbard Street 2, the young professional company of Hubbard Street Dance Chicago. She and fellow winner Todd Williams of New York-based WilliamsWorks will each have a one-week residency with Hubbard Street 2 and receive a stipend, housing, airfare, and other support.