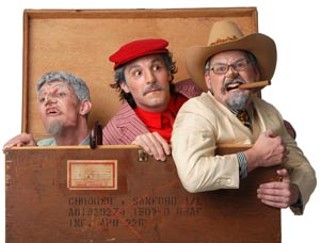 Just to be clear, Bill Irwin is down with it.

The clown extraordinaire and recent Tony Award-winner for his turn opposite Kathleen Turner in the Broadway revival of Who's Afraid of Virginia Woolf? called the folks at Tongue and Groove Theatre himself to say that he was pleased to hear that director David Yeakle was mounting his adaptation of The Three Cuckolds and that Yeakle was free to make whatever changes he wanted to the script. 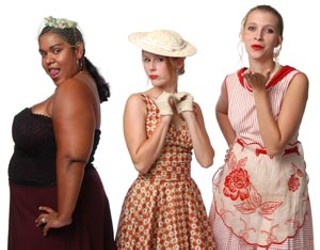 And that's sort of the point.

After all, Cuckolds is commedia dell'arte, an art form nicked from the piazzas of 16th-century Italy, where roving bands of players took a host of stock characters – lascivious old men, wily servants, young lovers, and so on – slapped 'em into sturdy old farcical plots involving infidelity, theft, more infidelity, and the like, and then improvised their way through them, plugging in topical gags and jokes about the locals in whatever town they happened to be in. It was never supposed to be set in stone. It was supposed to be as fresh as the bread and fruit being hawked in the market stalls around it. And Bill Irwin understands that; that was why, in 1986, he adapted the English-language script of Cuckolds by Leon Katz that had been in use since the Fifties. He was freshening it up a little, getting it into his audience's world, that day, that time. And now that it's been almost 20 years since he gave it a spritz, it's bound to be due for another. 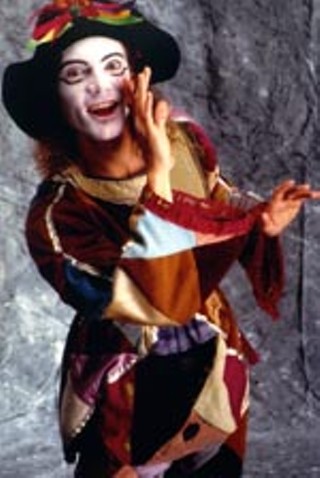 Yeakle in Fables in Mime and Song, Hip Pocket Theatre, Ft. Worth

And few people are as keenly aware of that as Yeakle, who staged the play himself 10 years ago. At that time, he was a grad student, delivering his thesis production at the UT Department of Theatre and Dance. Bill Clinton had yet to finish his first term and no one had heard of Monica, Austin was still flush in the tech boom and no one had heard of DVDs, and 9/11 was just another day on the calendar. Now, of course, our former governor is in the White House, the city has endured yet another bust and appears to be coming out on the other side of it, and Yeakle is teaching college students himself (at ACC) and is an artistic director of his own theatre company, which, though small, has a record of 18 quirky, delightful productions to its credit. Things change, and if Yeakle was going to return to clod-cuckold-land, it was only right that the cuckolds change, too.

Now, until recently Yeakle hadn't ever thought he would revisit The Three Cuckolds. That's just not the kind of thing he does. "Tongue and Groove has never restaged anything," he says. "And part of that has to do with me as a director. I just want to keep moving forward." But the company was coming up on its first decade, and it seemed right to do something special, something different, to mark that milestone, and maybe just this once, going backward was the right move. But, the director insists, "I was scared to death when I got the idea to do The Three Cuckolds [again]. I did it 10 years ago; it was fine. But I have the kind of memory where, when I work on a production, I'm so close to it that everything sticks with me. So I'm having to shed a lot of that. I'm trying not to say the same things to the designers or reiterate things, because I want it to be fresh."

Ah, the freshness thing. See, that's part of what made such a big impression on Yeakle when he actually saw the play for the first time. He had gone to the Actors Theatre of Louisville for a major festival featuring an international who's who of commedia dell'artistes – "Jacques Lecoq was there, Bill Irwin was there, Ferruccio Soleri from Milan came, and he's been playing Arlecchino for the last 50 years at the Piccolo Teatro" – and Irwin's adaptation was being presented in conjunction with it. Says Yeakle, "It just stuck with me. It was the first time I had seen or became cognizant of the fact that I was watching a very rigid traditional commedia structure that was updated to a contemporary setting. And it just got me thinking, 'Wow, this could probably work for all sorts of things.' So when I started thinking about what to do for my thesis, I wrote to Bill Irwin's representation." 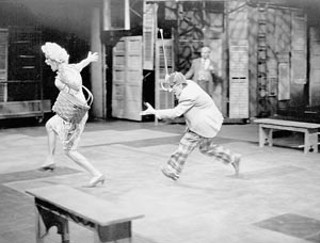 The Three Cuckolds, directed by Yeakle, UT Department of Theatre and Dance, 1995

The decision to tackle the Cuckolds was no mere whim on Yeakle's part, based on some road-to-Louisville commedia conversion. He had spent 15 years being steeped in the tradition at the Hip Pocket Theatre in Fort Worth, where Artistic Director Johnny Simons – no slouch of a clown himself – had staged a few commedia classics such as Mirandolina and penned several new commedia pieces. "He bases much of his original work in commedia style in as much as he writes parts for his company and fits people into kind of stock characters," says Yeakle. "We were working as a contemporary commedia company all along. I just wasn't cognizant of it until I saw somebody else doing something similar but in a much more formalized construct."

His love of the form eventually took him to study at the famed Dell'Arte School in Northern California and later to Italy for a workshop with master mask maker Donato Sartori. That he then wound up at UT for graduate school says more about Yeakle's desire to be within driving distance of the Hip Pocket than the school's ability to deepen his knowledge and skills in commedia. In fact, when he set out to stage The Three Cuckolds there, he found most of his colleagues in the theatre department had no training in the kind of theatre the show was grounded in. They had no chops for schtick.

"The students, especially the graduate students in the acting area, were never exposed to physical theatre," he recalls. "And to me, if you can't do a double take and a bell kick, how can you get a master's degree in acting?" Fortunately, the schedule enabled him to work through that handicap. "UT afforded me many more weeks than I had ever been used to working on a production, so I could actually work with the cast on the specific schtick and lazzi and fine-tune those moments and work on their characters from a traditional standpoint and bring contemporary ideas into that 17th-century foundation. It was wonderful having that process, and I wish that there was some way to always have the time that you needed. It's not always just money that makes a play. You have to devote a lot of time." 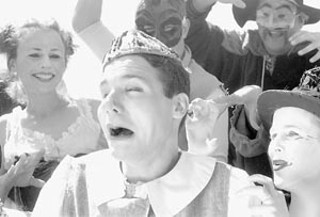 Of course, getting students up to speed on spit takes wasn't the only challenge Yeakle faced. "The department and Austin and the world was so different in the early Nineties. There was a great awareness of being politically correct about everything, so I didn't always feel confident in dealing with sexuality. And all of commedia deals with those huge appetites, hunger for food and lust for sex. So it was a little bit tricky dealing with that. There's a great deal of misogyny that goes on in some of the great classical theatre. [But] I think [the reason] why commedia was so successful for so long and why it enjoyed a resurgence in the theatre community in the last three or four decades is that it is taken to such an extreme that you can't help but have that aesthetic distance and you're able to laugh at it and realize that no one is advocating misogyny or infidelity. It isn't intended to offend anyone. It's just [to provoke] laughter from the gut."

And there you have one of the key reasons why Yeakle not only crafted an outstanding production of The Three Cuckolds deep in the heart of Texas at the height of the PC scare but was able to overcome his fear of going back to a show he had staged so successfully before: It's too damn funny. "The whole play strikes me as hilarious," he says. "I just read it and start cracking up. When a play has that kind of effect on me, I know I can make it work. It's hard to make an audience belly-laugh. That's hard, and I'm so admiring of people who do it all the time, especially without pandering. But that's our goal: to have people rolling in the aisles, to have them crying from laughing so much."

One significant change for Yeakle in the 2005 edition of The Three Cuckolds is a company of actors with whom he has worked before and developed a strong creative relationship in making this kind of theatre. "We have such a good rapport when it comes to figuring out how to do physical comedy that they now can bring all sorts of wonderful surprises that are just so appropriate in this world, that just belong in this world," he says. "We have the most fun when we're working in this particular style. We don't just do commedia. We try not to be a company that does just one thing, because we don't want to be limited in any way. But we love this style and when we find a script like this or Eggheads or even The Comedy of Errors that will lend itself to this approach, everybody gets thrilled."

And the director himself? Have the 10 years since he last staged Cuckolds seen any development in the artist and his approach to theatre? "I communicate gooder," he quips. "Now that I don't have the luxury of time, I don't think it's insulting so much to actors to overexplain an idea or to explain it in as many different ways as I can think of. Before, I expected people to read my mind a bit too much. But I found that time is better spent if I can just give them all the information I have right then at that moment, put it all out there and say, 'Okay, now interpret that any way you want and go and see what happens.'"

So David Yeakle is back at it, a little older, a little grayer, but no less hungry than that perpetually ravenous Arlecchino and no less hip to what he needs to provoke that big belly-laugh. "The play is intended to be in the here and now, topical," he says. "If something amazing comes up in the newspaper the night before opening, we'll find some way to work it in."