With Summerstock Austin, a gang of young performers serious about theatre get a chance to develop their craft in the old-school environment of a stock company 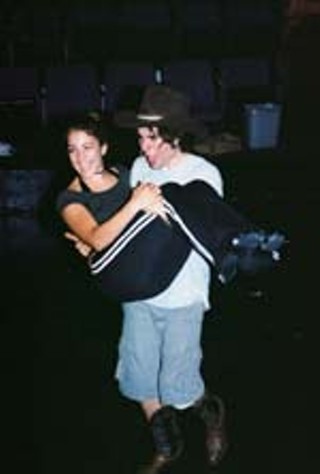 The choreographer wants to see the finale one more time, so the performers launch into it with everything they've got, sliding across the stage on their knees, doing lifts and splits, cartwheels and backflips, kicking heels in the air and thrusting arms high. The moves are beautifully in sync, the dance flowing smoothly from one routine to the next. These dancers have got it going on, and even though this is a rehearsal still two weeks from opening, they deliver that explosion of music, motion, and exuberance that brings a crowd at a Broadway show to its feet, cheering.

Did I mention these are high school and college kids?

Well, they are, the freshman class of Summer Stock Austin, a new educational venture that gives young performers with serious aspirations for a theatre career a chance to develop their craft in the old-school environment of a stock company. That means putting together a couple of shows with every member of the company working on every aspect of the production: performance, design, construction of sets and costumes, and assisting with, well, anything that needs to be done. It's a training ground not seen much anymore, but Ginger Morris and Michael McKelvey, the masterminds behind Summer Stock Austin, know how valuable it can be in rounding out young artists' stage skills and heightening their appreciation of everything that goes into bringing a play to life. So they set about to make it happen here, drawing on their many connections to local cultural and educational institutions, as well as pros in the biz, for space and resources. The resulting partnership of St. Edward's University, the Zilker Summer Musical, and the Austin Shakespeare Festival has enabled 40 performers from more than 13 area high schools and the St. Ed's Theatre and Music departments to work on a Shakespearean comedy and a Broadway musical. For three weeks, the kids have been putting in full days at the Mary Moody Northen Theatre, spending their mornings rehearsing Shakespeare's Much Ado About Nothing, directed by ASF Education Director Marc Scipione, and their afternoons on Footloose, the 1998 Broadway version of the Kevin Bacon film, with McKelvey and Morris co-directing and Broadway veteran Robin Lewis choreographing. Now, they're ready to show off what they've learned with a two-week run of those shows in rotating repertory. If you're speculating on the future of theatre, this is stock worth investing in.

All performances are at the Mary Moody Northen Theatre, 3001 S. Congress. For more information, call 448-8484 or visit