With a design firm on board, Arthouse makes a long-awaited start on transforming its second story 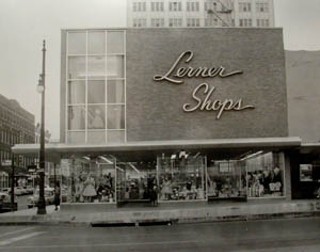 700 Congress, Then and Soon?: The building in its pre-Arthouse, department store days.

In 1995, when Arthouse – then the Texas Fine Arts Association – took possession of the building at 700 Congress, it planned to completely transform the former Lerner's department store, top to bottom. But as has been known to happen with construction projects (especially those involving local arts institutions), the best-laid plans aft gang aglay. The statewide contemporary art organization got the bottom part done – with Dallas architect Gary Cunningham crafting a nicely open and airy gallery/office space combo – but shortly after moving into the space in 1998, it put its plans for renovating the top on indefinite hold. Then, between the terrorist attacks and the economic downturn, the timing just wasn't right for picking them up again. So, for some seven years, Arthouse has made the most of its one floor while above it sat a whole other floor, silent and tomblike, waiting for its potential to be realized. 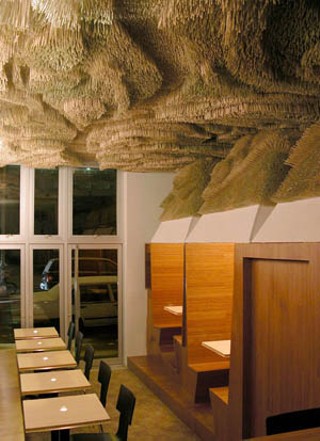 700 Congress, Then and Soon?: The New York restaurant Tides, designed by Lewis.Tsurumaki.Lewis, with its ceiling of 120,000 bamboo skewers

Well, if it's true that good things come to those who wait, that second floor of the Jones Center for Contemporary Art – and even the roof above it – may be in line for something very, very good. Earlier this month, Arthouse announced that it is finally primed to complete the renovation of the Jones Center and has chosen Lewis.Tsurumaki.Lewis, an inventive and much-buzzed-about architecture firm out of New York, as the design team for the job. Partners David J. Lewis, Marc Tsurumaki, and Paul Lewis have made a name for themselves by, among other things, reinventing small urban spaces – restaurants, lofts, a bakery – with visually dynamic touches, such as horizontal strips along the walls that make viewers feel they're being pulled into the space, and rich surface textures, often achieved with inexpensive materials, such as felt to line the length of a bar or bamboo skewers embedded in a ceiling. A survey of the LTL Web site reveals a penchant for a sort of geometric minimalism – clean lines and boxes predominate – but with flourishes of iridescent color and unconventional materials that don't just rescue the spaces from clinical austerity, they make them inviting and contemporary.

Obviously, that makes a nice fit for an institution dedicated to contemporary art. It suggests that with this expansion Arthouse's mission may be reflected in its walls and tiles and concrete and glass (or perhaps felt and bamboo), the very bones and skin of its facility. That could have a most interesting effect on the artists who use the three studios slated to share the second floor with a new 6,000-square-foot gallery.