The Original Theatre Company's 'The Two Lives of Napoleon Beazley' presents the story of a Texas teen sentenced to death with heartbreaking scenes, evoking pathos for injustice 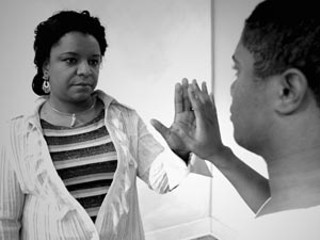 The Original Theatre Company's The Two Lives of Napoleon Beazley is the most important play to see in Texas right now. The case on which it's based is known in the state. When he was 17, Napoleon Beazley killed a man in an attempt to steal a car and was sentenced to death by lethal injection. Because of the Supreme Court's decision this year to abolish juvenile execution, nearly 30 juvies on death row in Texas are breathing a little easier. Napoleon's case was one of the last of its kind.

It's hard to imagine that the many issues and conflicts we are bombarded with in John Fleming's play are not fictional. His intent is to dramatize a true story, not to rehash conventional prison docudramas.

Napoleon's appeals lawyer, Henry Boyd (Chuck Ney), narrates the story to the audience as if addressing a jury, speaking softly, patiently. "Here are the facts," he says. Napoleon (Forest Van Dyke) is already sitting in his cage in the middle of a vacant set, which is paneled with gray wood, giving the sense that the setting is as impermanent as his life.

As Boyd lays out the tale, we are introduced to the inmate's loving parents, Ireland and Rena (Tim Curry and LynnS), who suffer the grief and anguish of having to watch their son go through a series of denied appeals. The grounds for the appeals were that the testimonies of the co-defendants were exaggerated, that members of the jury were revealed to be racially biased, and that the victim's son, a judge, pushed Robert Meese (Doug Taylor) to prosecute for the death penalty.

The force propelling the show is the ensemble cast. In a series of well-blocked mini-interviews, the actors take on various roles connected with the case, from the victim's co-worker to a waitress in his hometown, voicing all the opposing viewpoints on the issues of racism, judicial nepotism, ageism, and capital punishment. The ensemble is so dominant that you wonder if it's the bars that imprison Napoleon or his peers rallying against him.

Our inmate is not, however, without his finer and more outspoken moments. As Boyd's relationship with Napoleon develops, we come to realize just how well-read and rehabilitated the potential Stanford law student is, especially when he says, "Don't describe it to me. Tell me why. Why are you defending me?" Boyd has his own strange, out of place struggles with his father's death and the sympathy he feels for the victim's son.

This production presents the story dramatically with heartbreaking scenes that are not at all contrived or insincere. No actor outshines any other. Fleming's well-knit play unfolds effortlessly before us, evoking pathos for injustice.