Getting Kids Into the Act

Curtain up on GRRL Action and Vortex Summer Youth Theatre 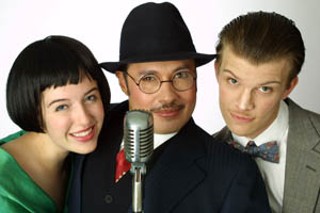 The summer months give parents a unique challenge: what to do with the kids during all that off-time normally taken up by school? For more than a few years, two of Austin's best-known alternative theatres have been offering options that get kids out of the house and into the arts.

Over at the Off Center, the Rude Mechanicals' GRRL Action program is in its sixth year. "At first it was a collaboration between Rude Mechs and the UT Department of English," says Madge Darlington, a Rude Mechs co-artistic director who has been with the program from its inception. "Some grad students in the English Department had taken a workshop from Terry Galloway called Actual Lives, which centered on autobiographical writing and performance, and we started talking about the idea of doing something similar for adolescent girls. We had done youth outreach projects before, and since it's mostly women that are the founders of Rude Mechs, we all shared an interest in allowing teenage girls to do this kind of work because we think they don't get as much of a voice in our society. They get so many messages in our culture about what they're supposed to be like and act like, and they don't get a chance to express themselves about what they're really thinking and feeling, unchecked."

"It's a love-oriented program," says Sarah Crowe, a 15-year-old who is now in her fourth year of GRRL Action. "The first week we do a lot of writing and bonding exercises. Everything is aimed at knowing everyone's deepest secrets, but no secrets are allowed to exit from the Off Center. The second week is deciding what we're going to do for the performance. The third week is dress rehearsals, getting the kinks out of everything. It's only three weeks, so you've got to move fast."

"In all the years we've done it," says Darlington, "we always get responses from women who say, 'I wish I had been able to do something like this when I was a girl.'"

A little farther north on the Eastside, the Vortex is hosting its 15th year of Summer Youth Theatre. "We've never chosen children's plays for our youth theatre because we want to give the kids an opportunity to explore real world issues in a structured environment," says Vortex company member Content Love Knowles, who is directing this year's Summer Youth production, Vitriol and Violets: Tales From the Algonquin Round Table. "It's a new play, the winner of a 2004 Oregon Book Award. Bonnie [Cullum, Vortex's producing artistic director] was one of the judges for the award. She thought it was a special and outstanding play and a good vehicle for us and our kids. It's a fun play, it's a funny play, and it also manages to address very serious subjects: suicide, politics, feminism, alcoholism, and the destruction of friendships. It's a challenging and entertaining piece."

"I've been doing theatre for quite a while," says Lia Ross, a 15-year-old first-time Summer Youth participant who will play Harpo Marx and Tallulah Bankhead in Vitriol. "I wanted to find something where everyone was really dedicated and cared about theatre and was good at it. This is more than I expected. It's real interactive and professional and a lot of work. We rehearse four nights a week, three to five hours a night. I've always been really frustrated with other people in theatre. The whole competition thing with everyone and the divas, but everyone at Vortex really supports each other and really has fun with each other and has so much fun with theatre. It's really been the greatest experience ever."

Both programs close out with public performances that can be great experiences for audiences, too – even if you're not the parent of an actor.

Vitriol and Violets: Tales From the Algonquin Round Table runs July 29-Aug. 6, Thursday-Sunday, 8pm, at the Vortex, 2307 Manor Rd. For more information, call 478-5282 or visit www.vortexrep.org.