Even without Hercule Poirot, the Different Stages production of Agatha Christie's 'Appointment With Death' provides a satisfying mystery 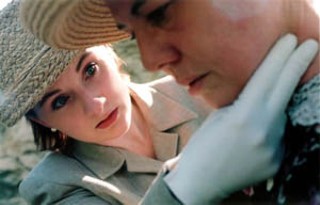 The Vortex, through July 16

Agatha Christie's fascination with necrology of the Middle East pervades many of her novels and plays. In adapting her 1938 novel Appointment With Death for the stage, Christie removed her darling hero Hercule Poirot from the story, but the setting is still an exotic Jerusalem of the 1930s. The mystery is an escape from the ongoing political drama of the region that engulfs us in the media today.

As the lights come up in Different Stages' production, we see a yellowed picture of the King Solomon Hotel's lounge on the diminutive Vortex stage. We are hurriedly introduced to a cast of tourists who waft in and out barking orders at clerks wearing tarbooshes, giving their how-do-you-do's, and buzzing around a silent, morose Boynton family, seated at a table, staring into space.

Dressed in forbidding black, the matriarch Mrs. Boynton (played aggressively by Paula Gilbert) has an eerie, hypnotic hold on her grown stepchildren: Jinny (Jessica Medina); Lennox (Keith Yawn), husband to Nadine (Julie Winston-Thomas); and Raymond (Andy Smith). Smith's Raymond is the picture of youth with his tail between his legs until he meets Sarah King (Nikki Zook), a perceptive doctor who fights Mrs. Boynton with her youth and sex. Scenes with Mrs. Boynton and her fearful progeny are full of brooding moments in which the stepchildren's motives for matricide are inflamed yet they surrender to defenseless resignation. "Can't you let me go? Please let me go," says Lennox. "You can't go. You're no good," she says.

Every action creates suspicion, and with the anticipation of homicide that comes with a whodunit, we immediately have questions about everyone. Who is the culprit? Did she mean to drop her handbag? What's with the sexy, mysterious Italian girl? Different Stages Artistic Director Norman Blumensaadt has cast actors with hidden talents that play up the mystery, yet his staging intersperses the cliffhangers with comic relief. Kathleen Lawson, William Holliman, Nicole Marosis, and especially T.J. Moreno are the crackerjack comedians, relieving the terror of the arid Arab climate.

The most charming aspect of the show is the characters, most notably the Poirot stand-in, the amiable Dr. Gerard (Craig Kanne, who took the role four days before opening but had mastered the majority of his lines and blocking by the end of opening weekend). Together with Dr. King, Gerard is able to solve the crime without the help of local authority Colonel Carbery, played by Steven Fay. (It isn't a Different Stages production without the expressionless yet likable Fay).

Different Stages is noted for producing interesting lesser-known works by famous authors. This sweet show of Christie's is no exception, and the company pulls off another amusing romp that separates the sadism of the evil stepmother from the Middle Eastern conflicts of the time.