Oh, Give Me a Home Arthouse invited the New Museum's senior curator at large, Dan Cameron, all the way from New York to curate its 20th exhibition of new American talent. In May, Cameron wrote: "Each of the selected artists offers, I believe, a worldview that is sufficiently complete for any viewer to enter fully into their practice and feel psychically at home. For my own part, I hope the results also provide an opportunity for the participating artists to feel that their works look like they belong, since in the end the ideal exhibition is also a visual essay about the resolution that all viewers hope to find: art as a provisionary home away from home."

Cameron has succeeded in combining characteristics among purposefully varied media to produce a cohesive and thought-provoking group of artworks. Based on his selections, Cameron feels "psychically at home" surrounded by imagery that is pensive, subtly complex, gorgeous, puritanically paranoid, and lonely. A dry wit or droll humor is also in evidence.

The current use of airplane imagery in art is easily tied to post-9/11 cultural concerns. Suddenly airplanes, our practical tools of commerce and icons of the frontier, were turned against us. This brings to mind the premise of much sci-fi: What happens when man-made objects are reborn as monsters or killer robots? The use of the airplane, rocket, and open sky in many of these artworks represents something of a mental quest to reflect on American power and portray technology in a good light.

The artists here work extra hard to will away the negative associations that have entered our collective TV-filled thoughts. The grainy photo of a plane by Michael Markos looks like an iconic memory. The vantage point is distant, ambient, and the plane looks older than it is. The airplane is a nostalgic boyhood object for male artists to revisit, like drawing a Porsche 944 or, for girls, a pony. It holds a certain romance; it's put on a pedestal. A sense of loneliness or timelessness can emerge from the empty quality of the sky and emotionally tepid distance of the vista. None of the pieces in this exhibit portray animated people inside an airplane; instead the planes are tiny, mysterious, and far away, rather wondrous and unknowable. This distancing is also clear in the aerial photos by Mark Abrahamson. Taken from a plane, the ground is far away, its inhabitants undescribed.

Rocket Launch, an acrylic painting by Austin artist Jonathan Marshall, depicts a cloudy chem trail behind a rising rocket. You can choose your own reference: offensive missiles, the Challenger, American military strength. Marshall has used a flat background color and added a graphic curly outline to the clouds. The careful craftsmanship and fluffy clouds belie the ominous content; a destructive power is implied but in softened, dreamy cartoon fashion.

While he was in town helping with the installation, I asked Dan Cameron some questions about Americans. He said, "Americans today feel more isolated than in the past. There is no middle ground." Along those lines, this exhibit appears pleasant but contains dark notes and moments of keen loneliness. Some of the darkness is humorous. Wesley Heiss has too much fun reforming television. His soft sculpture Everlast features a video (with airplanes in it) set into a round red punching bag. When you strike the bag, you operate the television. It's funny, paranoid humor about our passivity with regard to the media. 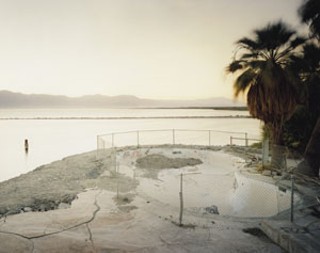 To be American currently is also to feel the emotional burdens of a nation at war, and the show reflects a sense of guilt. Leah Markov-Lindsey's Rx (view two, ambient) is an embroidered pill bottle still life, part pithy pop and part medicine cabinet voyeurism. Regardless of your feelings about crafting, it is a public confession of mental imperfection and frailty.

A series of watercolors that look like antique postcards portrays selected moments in evolution in a haunting and saddening way. Steve McClure's Cruelty Makes Memories is composed of 48 images set in rows of four related scenes, from miniature dinosaurs inhabiting a wild misty environment to little humans lynching one another to vacant landscapes to a bit of framed building, and so on. They feel like historical documents of an unromanticized and brutal progression of human development – a strong dark counterpoint to the jewellike quality of the artwork.

The sunbleached color scheme and stark composition of Keith Allyn Spencer's Untitled (los vatos) create a distinctly unpopulated image of downtown El Paso. This painting has bits of Diebenkorn's geometry in the architecture's sharp forms and bits of tender detail. The sunburned tone is uniquely sentimental. It seems to say: I heart El Paso – where the streets are deserted at 5:30 and the sun burns and ruins everything. The piece has great character, with Spencer showing how buffing and peeling facades may look like minimal abstract paintings of small warehouses on warehouses. With this modern landscape, Spencer strikes an elegant note of pride, toughness, and solitude.

Distant unpopulated vistas abound in this show. Perhaps one of the most ingeniously deceptive and exquisitely crafted is by Paul Chojnowski. At first glance, Nocturne: Midtown appears to be an out of focus sepia-toned photograph of a city at night. But each of its dark tones is burned through the paper; the bright lights in the building windows are simply the natural white of the paper. The range of color, like a fine photo or good print, is exquisite, as is the delicate texture and haziness. This work is just plain gorgeous and cleverly fabricated.

J Bennett Fitts' Salton Sea Marina Club is a large color photograph of an abandoned swimming pool at sunset that calls to mind kitschy, romantic, nostalgic, and lonely poetics. The concrete pool has dirt and some aerosol letters in it. The wind whips through a large palm tree. With good use of the magic hour, Fitts captures a haunting moment of suburban light. I think it's pretty packaging but with a rebellious undercurrent and some real longing and charm in it. Fitts succeeds in memorializing an all-American landscape for skateboarders in the not so punk rock style of Texas Highways. It's so contrived and yet magnetically attractive to anyone who liked the movie Dogtown and Z-Boys.

Denise Prince Martin's five photographic portraits are also sweetly vacant. Each captures a woman who's all dressed up, like for prom or a wedding, but standing alone, for example, in a seedy bingo hall. They are attractive women and yet somehow need the company of more friends. There is a consistency of feeling to this series: isolation, loneliness, fear of being left behind, nostalgia, and awkward personal memories. Another piece that addresses isolation and social frustration is Serena Lin Bush's installation Speak Easy (who's on first). Two videotaped hands use sign language to act out Abbott and Costello's famous comedy routine with an accompanying laugh track. Sadly, the linguistic puns don't translate at all to signing, giving a sense of being left out of the joke.

Cameron said that "media was not at all important in choosing this artwork" and that these artists all share "a return to an interest in image-making, making visual images in new ways. It's very unparticular regarding how the art is made – the video is very pictorial, like moving paintings." While operating clearly under this premise of "visual pluralism," Cameron picked two paintings that seem affected – the type of abstraction that begs you to deconstruct their technique rather than build a narrative. Susan Cheal toys with color theory, teasing out perspective forms then flattening them with poured paint. She loses me completely when she adds stamping in one corner. It's like she's showing how many paint application processes she can squeeze into one painting. The painting by Hillary Wilder shares a similarly technical premise. It's a large tea-colored piece, with camouflagelike line drawings visible through transparent washes. These look nice in some of the sky areas, but in the foreground the colors become heavy and muddy. The title, The Burning of the Houses, is intended to add drama to the one chunky dotted line of thick paint, squeezed from the tube, to imply a distant horizon line. It shares a tragic and faraway tone with other works in the show.

This year's smorgasbord of talented new Americans has a nicely refined flavor. Dan Cameron's consistent eye for emotional tone imbues the atmosphere of the rooms with hopeful reflections and proudly nostalgic pieces. The show is accessible, approachable, naturalistic, and basically good-looking. It feels like a summer show. Iconic skyscapes, unpopulated streetscapes, reflected lights, and glares blend with lonely portraits, movable TV sculptures, embroidered prescription drug bottles, videos that wish they were paintings, all speaking together to communicate a certain delicate isolation, not desolate but from the vantage point of a sensitive, reflective person.

In his catalog essay, Cameron further addresses the current climate of all-media pluralism. "Those artists who embrace today's pluralistic zeitgeist generally do so with the knowledge that they are not just responsible for making their work, but also for providing a context in which their work makes sense." It's great to see the focus of the content of this show; the messages communicated within the works speak softly and often truthfully about feelings of isolation, autobiography, fear of the military, and technological power.

"New American Talent: The 20th Exhibition" runs through Aug. 21 at Arthouse at the Jones Center for Contemporary Art, 700 Congress. For more information, call 453-5312 or visit www.arthousetexas.org.