Drawn to Be Funny

At Camp Fig's new show, forget the art history and just laugh at the oddball imagery 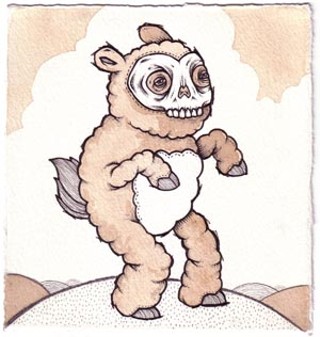 Are skateboarders just funnier than average?

"A Clever Name for a Drawing Show" opened last Saturday at Camp Fig. Hopefully everyone knows that Michael Sieben, the guy who put the show together and co-founded Camp Fig, curates, paints, draws, and skateboards. Does he live in a bubble of Eighties nostalgia? Well, sure, but in a good way. He's managed to curate an exhibit that hints of a socially broad skater community, complete with a dose of strong female artists but no fake coastal rivalries. While Sieben didn't waste much brainpower on a title for the show, his artworks make up for this blatant disregard for nomenclature. One drawing by Sieben is of a little hoofed animal whose fur is indicated by little cloudlike puffs – not what you would expect on a deer. In another piece he drew a little monster peeking upward with a quizzical expression. This little guy is on a $2 check from Arthouse, a payment from his participation in its show "Lounge." The phenomenon of framing really small checks is something I've previously noticed only among actors with tiny royalty checks, but it seems to apply to visual artists also.

What I like about this show is that it's straight-up visual communication via pen to paper. It doesn't try to make you rethink the art history of drawing. Instead it fills your head with funny, oddball imagery. To generalize, in this world the monsters and animals are cute and fluffy and talk to us, while the people are creepy and sad. Many of the drawings use the figure small on the page, with a text caption. Several of the artists here work as commercial illustrators and take great pleasure in devising sassy captions of their own. I looked up Mike Aho's Web site at the L.A. skate shop Volcom and cracked up. A simple black ink-wash painting of a man about to toss a football has a caption that reads, "Hey, lifetime of regret, go long." The humor in Aho's new work is comparable with and perhaps influenced by the artwork of Sam De La Rosa and Francesca Russo. These two left Austin for Brooklyn, but they continue to share their collectively wry wit with us. Russo's technically clean graphite drawings are twisted as usual; her main device: Draw someone attractive and just add drool.

With humorous art, there is always a risk of seeming childish, but it's a risk worth taking, as it's much better to laugh and laugh and occasionally appear naive than to wallow and stew in contrived art world pretensions. Comedy and tragedy are sides of the same coin, and the comic artist is refreshingly honest. The artists here do not ask the viewer to lower the head in Puritanical reverence to a bowl of flowers. (Well, actually, D.H. Pendleton did contribute a still life of vases, but he put cute eyes on them.) These drawings have an emotionally flippant and spontaneous nature that could make you smile even while you're flossing. These artists are prolific, personable, and savvy. They take the cake for adding invigoratingly personal humor to Austin's art scene. Here's what Sieben has to say about them and the show.

Austin Chronicle: Your artwork includes paintings, silkscreens, and graphics. What do you like about just plain ol' drawing? 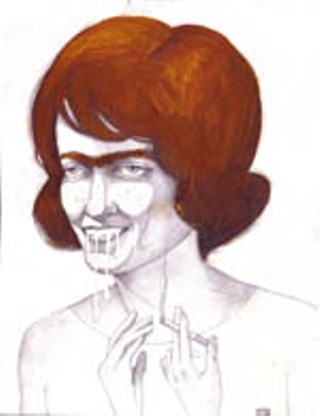 Michael Sieben: I guess when I'm drawing I feel a little more freedom to experiment than I do with my paintings. Probably because I have less invested in them. I get nervous when I paint. I don't like fucking up my paintings. It makes me sad.

AC: I know you make illustrations for Thrasher Magazine. Are they mostly pen and inks? Are those drawings like the ones in this show?

MS: Yeah, almost everything I do for Thrasher at least starts out as pen and ink. Sometimes my computer lends a hand with the coloring. The drawings I'm including in this show don't really look much like my commercial work. I think they're a little more delicate than what I do for the magazine. 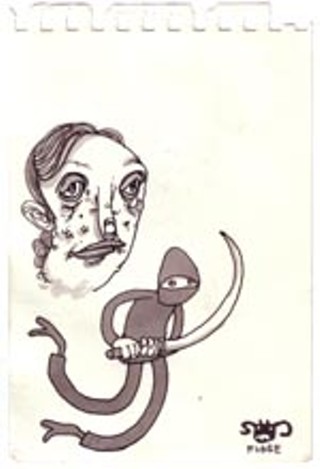 AC: It looks like Mike Aho will come back to visit Austin. What has he been up to? How do you stay in touch with so many folks? Don't tell me MySpace ...

MS: Mike's been out in California doing artwork for Volcom Stone. He's also been making a lot of music and painting and skateboarding. I stay in touch with so many folks through the United States Postal Service, the telephone, e-mail, ... and, yeah, MySpace. MySpace is kind of like drinking Sparks. It's kind of embarrassing, but it's also kind of awesome.

AC: What makes you stoked about this show?