Austin hosts not one, but two national conferences on the arts the same weekend in June 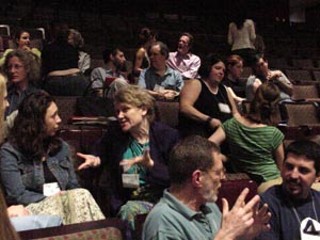 That steady roar of fervent chatter you're hearing about all things artistic this weekend is the result of our fair city hosting not one, but two national conferences on the arts. Americans for the Arts, a heavyweight nonprofit that works to increase appreciation and support for the arts throughout the land, is ensconced at the Hilton downtown, where it's holding its 2005 confab – the aggressively titled Leading the Charge – through Monday, while Literary Managers and Dramaturgs of the Americas, a professional association of theatre artists who focus on the form's textual aspects, takes over the State Theater Friday-Sunday to discover Austin Live.

Both events share a concern with taking the arts to the next level, in terms of bettering the way art is made and improving the place of the arts and artists in a society that increasingly relegates them to the fringes, but they come at these challenges from opposite directions. Leading the Charge collects culture mavens from across the country – e.g., guru of the moment Malcolm Gladwell, author of The Tipping Point and the newly released Blink: The Power of Thinking Without Thinking; Ad Council CEO Peggy Conlon; choreographer Donald Byrd – and brings them to Austin to offer models for success (along with such nods to homegrown successes as musician Alejandro Escovedo and co-founder of SXSW and this very paper, Editor Louis Black). Austin Live, on the other hand, finds its models in the city where it's meeting, with a keynote address from former mayor Kirk Watson and presentations from arts companies such as Salvage Vanguard Theater and the Rude Mechanicals, individual artists such as Steve Moore, Sharon Bridgforth, and Yacov Sharir, and journalistic interlopers such as, well, the guy typing this.

But don't think these are all speeches, panels, and PowerPoint presentations; there's art, too. The LMDA crowd is showing off the first fruits of its Collaboration Project, which teams a playwright and a musician from Austin with a visiting dramaturg to develop a new work collaboratively. Each of the project's four teams – playwright Zell Miller III, musician Phillip Owen, and dramaturg Vicki Stroich; playwright Molly Rice, musician DJ Katastrophik, and dramaturg Madeleine Oldham; playwright Dan Dietz, musician Spot, and dramaturg DJ Hopkins; and playwright Jason Tremblay, musician Sam Baker, and dramaturg Heidi Taylor – will present 10 minutes of the work it's developed over the past six weeks (2pm at the State Theater, 719 Congress). Americans for the Arts is revving up its conference with an Art Car Parade down Congress Avenue at 6pm on Saturday, June 11, and free performances by breakdance collective B-Boy City at the Frost Bank Building; Peruvian band Wayanay Inka will perform at 816 Congress.

So why Austin, why now? Austin Script Works Executive Director Colin Swanson credits the national buzz about the city. "Liz Engelman, the president of LMDA, called me just after I took over ASW and said, 'Hey, what would you think about the conference coming to Austin?' I didn't lobby for it at all. But I think what led LMDA to Austin was this: Local artists do really interesting work. There's a buzz about this town because of the legacy of Frontera, because of the touring work of the Rude Mechs, because Hyde Park produces really fascinating, Obie-award winners like Melanie Marnich, because Salvage launches the careers of new writers like Dan Dietz, because of Zach's productions like Jouet and Love, Janis; because of all the Michener playwrights, because of the dynamic Latino Comedy Project – it's no surprise that the LMDA membership kept hearing about us." Now, they're seeing for themselves what we get to enjoy 52 weeks a year.

For more information about Literary Managers and Dramaturgs of the Americas' Austin Live, visit www.lmda.org.