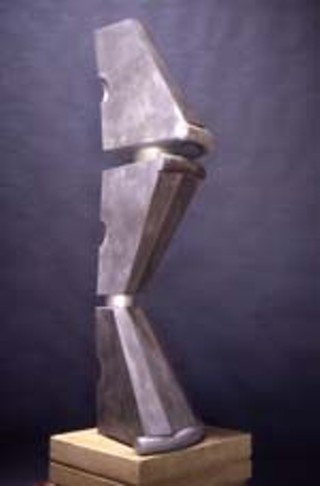 Artists Ryah Christensen and Sun McColgin titled their new exhibition "Two Paths on the Same Journey" to reflect their creative approach. The couple shares an interest in ancient cultures and artifacts, but they explore it independently. Christensen's paintings and murals tend to develop rather epic narratives within their boisterous size. Her stories are oriented toward Mayan myths, family history, and her own recent experiences, as in the painting Wailing Wall, which recalls a time when she allowed some disruptive students in a youth art program to do anything they wanted on a large red sheet of paper. The painting features three girls in adorable mermaid dresses facing a red painting with stick-figure devils on it; "shut up" is written out in various forms, and the canvas is torn. Christensen laughed as she recalled the cathartic effect that the wall had on the frustrated girls. She also said, "My work, more and more, focuses on the space between despair and hope."

Does the Light Go Out When You Close the Door? by Ryah Christensen

McColgin's art is primarily abstract sculpture. He uses stacked steel forms, repeating similar modules but adding a delicate tilt here, an oddly shaved angle there, and a shaped hole or transparent punctures. These forms – typically smaller than 6 feet in any dimension – change as you move around them. They seem like perhaps they shouldn't stay upright, the open windows usually highlighting the farthest depths of the piece.

When I ask him what is new about his art this year, McColgin says, "The themes of balance and transparency are integral to my work. I want the viewers to question their own sense of stasis and motion in the world. Things that seem to be solid and secure could fall and shatter at any time. I have begun using sparkly automotive finishes on my pieces – in really loud palettes that change color as you move around them. This is different from past pieces that looked like steel. The bright-hued finishes in a way mask the medium and contribute to the sense of motion that I am trying to achieve."

I ask Christensen which piece in the show has the most potential to influence her future work. "The fridge piece," she replies. "Does the Light Go Out When You Close the Door? most represents the direction I am heading in, combining the different mediums of painting, mosaic, and wood cutouts in an interactive piece that literally changes when you touch it. For me this is a continuation of a motive I've always had that my audience is not a passive onlooker, but a character in the drama they are witnessing. Making a piece actually respond to physical touch just reiterates the idea that all art changes when the audience looks at it or thinks about it. With this piece I hope that you actually feel your own presence when you open the door."

This show is an eyeful. Christensen's big character-based paintings can make you think a bit, and I like that her stories change from piece to piece, effectively hitting several different emotional pitches. McColgin's new work is sweetly minimal and cerebral, but it's now even better with more glitter and shine. I enjoy the powder-coated look. Its clean highlights effectively put to rest all the dirty grinding that goes into forming the pieces.

"Two Paths on the Same Journey" is on display June 2-29 at the Julia C. Butridge Gallery in the Dougherty Arts Center, 1110 Barton Springs Rd. For more information, call 397-1469 or visit www.ci.austin.tx.us/dougherty/gallery.htm.

Ryah Christensen, Sun McColgin, Two Paths on the Same Journey, Wailing Wall, Does the Light go Out When You Close The Door?